The greatest hazard that threatens process vessels is pressure. It is rare that temperature alone will cause a vessel to fail. Therefore, it is critical to identify and then mitigate or prevent the potential for overpressurization of process vessels.

During a chemical process upset, heat from the intended (desired) reaction can lead to a secondary reaction or decomposition reaction at elevated temperatures. This in turn can lead unanticipated rates of evolved non-condensable gas and/or vapor. Upset conditions (e.g., loss of cooling, excess catalyst, incorrect raw material added etc.) may lead to potentially uncontrollable rates of reaction or unintended reactions. Finally, self-heating or self-reactive substances, during shipping or simply storage over time, can accumulate heat at a gradually accelerating rate, and similarly generate excess pressure from gas or vapor.

Adiabatic calorimetry is a standard technique that can simulate all of these scenarios to develop the critical safety data to prevent or mitigate the effects of a reactive chemical accident. Simulations are done at bench scale to determine the consequences of a runaway reaction before it can occur at process scale. Directly scalable adiabatic data can be obtained from specialized low thermal inertia instruments such as the Vent Sizing Package 2 (VSP2) or Advanced Reactive System Screening Tool (ARSST) although not from the Accelerating Rate Calorimeter (ARC).

VSP2 and ARSST calorimeters provide the data to answer key questions such as:

Fauske & Associates (FAI) has been a developer and manufacturer of adiabatic calorimeters since we designed and built the original DIERS Bench Scale Apparatus in the early 1980’s.

This instrument was later commercialized as the VSP and later upgraded as the VSP2. Prior to the VSP there was no calorimeter on the market that could directly simulate a runaway reaction in an adiabatic environment representative of actual process conditions. In particular, the DIERS program identified the need to have a sufficiently light-weight test cell so that the thermal inertia of the test cell does not mask or dampen a chemical runaway relative to what would occur at process scale. The result was a “low phi-factor” apparatus whose data can be directly scaled up without resorting to tedious and sometimes uncertain computer modeling. The term phi-factor is defined as the ratio of the combined heat capacity (of the sample + test cell) to the heat capacity of the sample alone, so a value close to one is preferred if the data are to be directly scaled to process conditions.

The Reactive System Screening Tool (RSST) was subsequently developed as a simple alternative to the VSP. Advancements in design led to the ARSST. FAI regularly uses both the VSP2 and ARSST instruments in support of our contract testing and consulting work, performing well over 100 tests each year. The VSP2 is the more sophisticated and expensive instrument and represents Available Best Practice for obtaining adiabatic runaway reaction data. The ARSST, while not as versatile as the VSP2, is both easier to use and less expensive to own and operate. The ARSST can be considered Minimum Best Practice and is an ideal complement to the VSP2 for dedicated process safety laboratories. Each system has certain advantages. 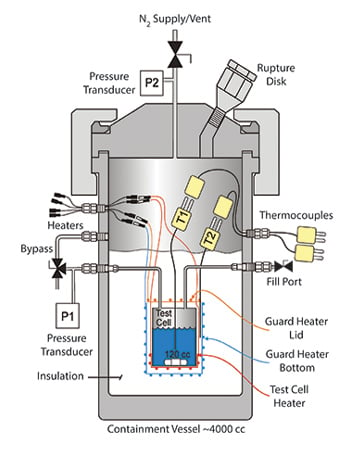 The Vent Sizing Package 2™ (VSP2™) is the premier low thermal-inertia (low phi-factor) adiabatic calorimeter used for process hazard characterization. The VSP2 utilizes established DIERS technology to obtain critical safety data used to ensure safe process design. It is the commercial version of the original DIERS bench scale apparatus invented at FAI. We use the VSP2 every day in our fully equipped thermal hazards laboratory, and we also manufacture the instrument and support its use by colleagues around the world.

The VSP2 can be thought of as a bench scale chemical reactor contained within a protective containment vessel. Liquid or gaseous reactants can be added to (or withdrawn from) the test cell at any time during an experiment. Tests can be run in true adiabatic mode, with added external heating, or with external cooling. The cylindrical geometry of the test cell is ideal for reactions which require good agitation. Test cells are custom-made in a variety of materials and configurations to better simulate the process conditions.

VSP2 tests can be run in open cell mode (typical for very gassy systems) or in closed cell mode where the thin-walled test cell is kept intact by automatic pressure-balancing. Closed cell operation provides continuous pressure-temperature data during a runaway reaction, information which is necessary for detailed vent sizing calculations and which can be otherwise difficult to determine. Closed cell tests also require less post-test cleanup.

The sample size in the VSP2 (typically 80 ml) provides for a representative sample as well as good accuracy when adding ingredients that make up a small percentage of the mixture (e.g., catalyst additions). Temperature can be measured at up to three locations in the test cell, a useful option when testing solids or immiscible liquids. A baffled test cell with either a “star” stir-bar or a mechanical agitator can be used for optimal mixing of multiphase reactions, such as for emulsions, suspensions, or slurries. For true adiabatic operation (i.e., with low phi-factor and without externally imposed heating) the VSP2 is usually preferred. Polymer and multi-phase systems are particularly well suited to the VSP2 because of the excellent agitation and continuous vapor pressure measurement.

The VSP2 typically utilizes a sample size of 40-100 grams in a lightweight metal test cell with a volume of approximately 120 ml. The test cell is surrounded by a heater which is used to maintain adiabatic conditions during an experiment. This test cell and heater assembly is placed in a 4L containment vessel. Tests are typically performed as a closed system, so that vapor pressure data can be directly measured throughout the runaway.

The VSP2 represents Available Best Practice and has its roots in established DIERS technology which is recognized by OSHA as an example of good engineering practice. The VSP2 identifies and quantifies process safety hazards so they can be prevented or accommodated by process design. VSP2 data include adiabatic rates of temperature and pressure change which, due to the low thermal-inertia test design, can be directly applied to process scale to determine relief vent sizes, quench tank designs and other relief system design parameters related to process safety management.

The versatile VSP2 design lets you directly simulate most process upset conditions including:

Many testing configurations to accommodate a range of applications including:

CONTACT US to discuss your process safety applications and obtain a customized VSP2 quote. 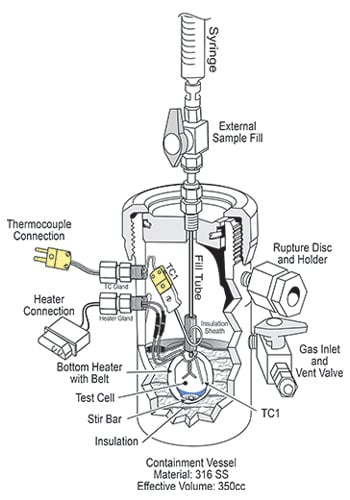 Fauske & Associates, LLC's (FAI) Advanced Reactive System Screening Tool (ARSST™) is a low thermal-inertia calorimeter used to obtain critical upset process design data. The ARSST, while not as versatile as the VSP2, is both easier to use and less expensive to own and operate. We use the ARSST every day in our fully equipped thermal hazards laboratory, and we also manufacture the instrument and support its use by colleagues around the world.

As the name implies, the ARSST is well suited for basic process safety screening tests, particularly if one has only limited knowledge of the material being tested. ARSST technology was originally developed as a short-cut alternative to VSP2 testing. ARSST tests are easy to perform and require little specialized training. The tests generally are much quicker to set up than VSP2 tests, and the cost of consumables is low. The sample size is relatively small (several grams), which is an advantage during early process development when material can be scarce, or when very energetic materials are encountered, or when decomposition products are particularly hazardous and call for special cleanup procedures like gas scrubbing and acid neutralization. Typically, an ARSST test uses about a 10 ml sample, although samples as small as 1 g have been successfully tested.

ARSST tests are normally performed in what is called “open cell” mode. In open cell testing, vaporization (boiling) is suppressed by imposing an initial nitrogen gas “pad” in the containment vessel. For example, an inert gas pad pressure of 300 psi (20 bar) is typically enough to substantially increase the boiling point of the liquid reactants, such that there is negligible loss of reactants during the test. In fact, through numerous DIERS round robin exercises we have demonstrated excellent agreement between open cell ARSST data and closed cell VSP2 data, in particular with regard to data for vent sizing.

If non-condensable gas is generated in an ARSST test, then it accumulates in the surrounding containment vessel (350 or 450 ml) and the molar rate of gas generation is readily estimated using the measured pressure rise rate and the ideal gas law. Note that open cell testing is the recommended approach for gassy systems, which would be difficult to accommodate in a light weight closed cell due to extremely high pressures, gas volume uncertainty, and solution effects. Although VSP2 tests can also be done in open cell mode, the ARSST is often preferred for gassy decompositions simply because there is less material to handle and clean up. A closed cell ARSST option is also available and is useful for certain screening applications but it is not suitable for vent sizing data.

The ARSST can be used to demonstrate whether tempering (boiling) at the relief set pressure is sufficient to suppress a runaway reaction. This is done by running the open test at the relief set pressure, say Pset = 15 psi (1 bar), by using a 15 psi (1 bar) pad rather than 300 psi (20 bar. One such example is an organic peroxide/solvent solution where a sustained fire heats the mixture and then boils off the solvent, during which time there may be some decomposition of the peroxide. If there is insufficient solvent latent heat available, then following solvent boiloff the subsequent decomposition rate of the remaining peroxide heel is inferred directly from the measured pressure rise rate. The ARSST is well suited for direct fire simulation testing (up to 30ºC/min)

Liquid can be added directly to the ARSST test cell during a test using a fill tube. Samples are agitated using a magnetic stirrer. Test cells are normally made of lightweight glass to achieve a low phi-factor. It is also possible to use a heavier metal cell such as an ARC bomb, although this is not common because the associated high phi-factor means the data are not directly scalable.

The ARSST represents Minimum Best Practice and is based on established DIERS technology which is recognized by OSHA as an example of good engineering practice. This easy-to-use device is capable of quickly generating low phi-factor data for DIERS vent sizing and is an excellent tool for industry as well as any university chemistry or chemical engineering lab for research or unit operation studies. The ARSST enables users to quickly obtain reliable adiabatic data which can be used for a variety of safety applications including vent sizing, characterization of material compatibility, thermal stability and reaction chemistry. Test data include adiabatic rates of temperature and pressure change which, due to the low thermal inertia, can be directly applied to process scale.

The ARSST design lets you directly simulate most process upset conditions including:

Testing configurations are limited compared to the more versatile VSP2, but the ARSST has advantages in terms of small sample size, glass test cell, and ease of setup for quickly screening new or existing processes and generating the minimum safety data for applications such as:

CONTACT US to discuss your process safety applications and obtain a customized ARSST quote.

Have more questions about VSP2 or ARSST?