According to the Nuclear Energy Institute (NEI): "The nuclear energy industry plays an important role in job creation and economic growth, providing both near-term and lasting employment and economic benefits. The nearly 100 reactors in the United States generate substantial domestic economic value in electricity sales and revenue—$40 billion to $50 billion each year—with more than 100,000 workers contributing to that production. 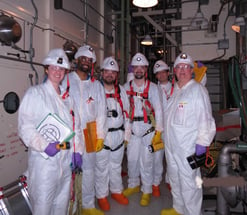 than half of the nuclear energy facilities in the country. The studies show that the typical nuclear plant generates approximately $470 million in sales of goods and services in the local community and nearly $40 million in total labor income. These figures include both direct and secondary effects. The direct effects reflect the plant’s expenditures for goods, services, labor and profit—approximately $453 million. The secondary effects at the local level—approximately $17 million—include indirect and induced spending attributable to the presence of the plant and its employees as plant expenditures filter through the local economy (e.g., restaurants and shops buying goods and hiring employees). Extended to the state and national economies, secondary impacts increase by $80 million and $393 million, respectively.

Every dollar spent by the industry at a nuclear facility results in the creation of $1.04 in the local community, $1.18 at the state level and $1.87 at the national level. Each plant generates almost $16 million in state and local tax revenue annually. These tax dollars benefit schools, roads, and other state and local infrastructure. The average nuclear plant generates federal tax payments of approximately $67 million annually.

Natural gas-fired electricity generation has more than doubled since 1990 to 30 percent of all production. Natural gas fuels nearly all power plants built over the past 15 years. However, natural gas is subject to significant price fluctuations. The greater the country’s reliance on natural gas, the greater the likelihood that electricity prices will experience increased volatility in the future.

The polar vortex uncovered some significant vulnerabilities in the electric supply system.  In PJM, during the extreme cold in early January 2014, a little over 40,000 megawatts – 22 percent of PJM’s installed capacity – was forced out of service because coal piles and coal-handling equipment froze, gas wells froze at the wellhead, fuel oil deliveries and barge traffic were interrupted, or gas-fired plants simply could not purchase natural gas at any price.  In MISO, approximately 33,000 megawatts of capacity was forced out of service, one-quarter of which was gas-fired capacity.  Nuclear power plants had average capacity factors in the mid-90 percent range.  Fuel and technology diversity is the bedrock of a reliable, resilient system, and premature shutdown of nuclear units would compromise that value.

Uranium fuel for U.S. nuclear power plants is abundant and readily available from stable allies, such as Canada and Australia. The long-term stability of fuel cost, coupled with industry success over the past 15 years in reducing operating costs, makes America’s reactors among the lowest-cost sources of electricity available."

"Nuclear power is an economic source of electricity generation, combining the advantages of security, reliability, virtually zero greenhouse gas emissions and cost competitiveness. Existing plants function well with a high degree of predictability. The operating costs of these plants are usually very competitive, with a low risk of significant operating cost inflation. The capacity factors of existing plants are high (over 90% in the US). Nuclear power plants provide electricity when it is needed. Plants are now expected to operate for 60 years and even longer in future. 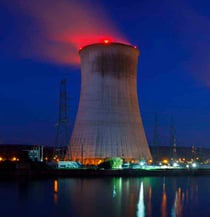 The International Energy Agency (IEA) sees the global demand for electricity growing at 1.9% per year in the period to 2040. Given this demand environment, coupled with the desire to reduce the greenhouse gas emissions from the generation of electricity, the IEA projects growth of an annualised 2.3% in nuclear generation over that period.

Nuclear competes well with rival generation technologies as is indicated by the assessment of the Organisation for Economic Cooperation and Development (OECD) - Nuclear Energy Agency (NEA) & IEA, although the level of competitiveness does vary at different discount rates and between countries. In the pivotal Chinese market, nuclear has a lower levelised cost of generating electricity (LCOE) than any other technology barring hydro.

In some electricity markets, especially those that are deregulated, subsidised intermittent renewable generation and gas-fired generation not penalised by carbon costs are creating economic difficulties for all baseload generators, including nuclear. Where the system and external costs of competitor technologies are added to the plant-level costs, the competitiveness of nuclear is enhanced. In order for these advantages of nuclear to be fully realised, policymakers need to address fundamental market design problems. In some countries, deregulated markets are being partially re-regulated in order to place monetary value on the qualities that nuclear power brings (reliability, security, zero emissions).

The economics of new nuclear plants are heavily influenced by their capital cost, which accounts for at least 60% of their levelised cost of electricity. Interest charges and the construction period are important variables for determining the overall cost of capital. The escalation of nuclear capital costs in some countries, more apparent than real given the paucity of new reactor construction in OECD countries and the introduction of new designs, has peaked in the opinion of the IEA3. In countries where continuous development programmes have been maintained, capital costs have been contained and, in the case of South Korea, even reduced. Over the last fifteen years global median construction periods have fallen. Once a nuclear plant has been constructed, the production cost of electricity is low and predictably stable."

What are the components of nuclear plant safety and maintenance?