Don't Get Burned by Battery Fires, Test to New UL 9540A Standard

It is a perfect November morning in Glassboro, New Jersey. The alarm on your phone wakes you up fifteen minutes before class starts. More than enough time to roll out of bed, brush your teeth, throw your Rowan University sweat shirt on along with a pair of jeans, and make it to class with time to spare. As you walk out the door, you sub-consciously grab your headphones to set the mood for the not-so-leisurely stroll to class. But the mood won’t be set because the battery on your phone is too low. Not a problem. Your slightly more responsible classmate has a portable charger. “Thanks,” you say as the now charging phone and charger slide into your pocket.

An hour later as you chat about Thanksgiving plans with your peers, your pants catch fire. 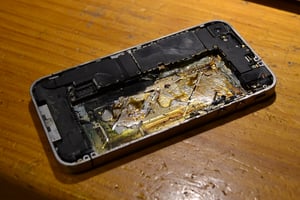 Ever since the wide spread use of the steam engine in the 1800’s, to the gasoline powered automobiles invented a century later, and all the way to a 2016 incident with a portable phone charger, energy storage devices have carried an associated fire and explosion risk. Given the number of personal devices that people carry on themselves, whether it is a phone, laptop, Bluetooth headphones, a smart watch, or a vaporizer, the quantity of batteries produced has increased exponentially. And so has the risk. The risk of injury. The risk of a lawsuit. The risk of a fatality.

“The U.S. Fire Administration declared batteries the “root cause” of at least 195 separate fires and explosions from 2009 to 2017. The Federal Aviation Administration has reported a few hundred incidents of smoke, fire, extreme heat, or explosions involving lithium-ion or unknown batteries in flight cargo or passenger baggage. And there were 49 recalls of high-energy-density batteries from 2012 to 2017, according to the Consumer Product Safety Commission, concerning more than 4 million devices, including mobile phones, scooters, power tools, and laptops.” (The Atlantic, April 30, 2019)

To better understand the fire characteristics of a battery energy storage system, Underwriters Laboratory (UL) released the 4th Edition to standard UL 9540A. This edition of the standard requires the generation of specific data to determine the fire and explosion properties of an energy storage device. This is where Fauske and Associates LLC (FAI) can help.

The UL 9540A Ed. 4 standard requires intensive testing on multiple aspects of battery usage, from the battery cell level to the module level, and establishes guidelines on installation. In total the UL 9540A Ed. 4 standard is a cornucopia of requirement codes that references an American Society of Heating, Refrigerating and Air-Conditioning Engineers (ASHRAE) standard, four ASTM standards, two Canadian standards, an EN standard, an ISO standard, and a plethora of NFPA standards. Keeping track of which testing you may need can be daunting, but the Flammability department at FAI is here to help you.

Among some of the newer requirements found in Edition 4 are a series of flammability tests that must be performed on the battery cell when that cell is heated to a point of venting and beyond to thermal runaway.

Section 7.4 describes these four tests. These include two lower flammability limit (LFL) tests. One of the LFL tests is done at ambient temperature, and the other LFL test is conducted at the temperature the cell begins to vent gas. These tests are to be run in accordance with ASTM E918, a method that falls within Fauske’s ISO 17025 Scope of Accreditation. The third required test is an explosion severity test. The explosion severity test determines the maximum overpressure and the maximum rate of pressure rise of an explosive event. The method used for this test is EN 15967, which is scheduled to fall within Fauske’s ISO 17025 scope this year. Finally, the fourth test is the burning velocity test. There are two methods to choose from when generating this last data, ISO 817 and NFPA 68 Annex E. Currently FAI tests to the NFPA method, which will also be added to Fauske’s ISO 17025 scope, but plans are underway to include ISO 817 to the Fauske arsenal of testing as well.

The results from these four flammability tests will satisfy the requirements necessary for Sections K, L, and M of a Cell Level test report.

For more information on explosion severity, LFL testing, and burning velocity determination to comply with UL 9540A Ed. 4, please contact the Fauske and Associates flammability department at flammability@fauske.com or reach out below: