With the growing concern of fires or explosions resulting from processing or handling hazardous material, it is important to characterize the flammable properties of that material. The flammability properties of fuels have been extensively studied for many years and are relatively well understood. Essentially, there are three elements required for a fire or an explosion to occur: a fuel, an oxidizer, and an ignition source. Through removal of one of these requirements, a fire/explosion will not occur. However, eliminating the ignition source as the sole means of fire/explosion prevention of hazardous chemicals is not a practical means of prevention due to flammable vapors having very low minimum ignition energies as well as numerous different ignition sources (known and unknown). Therefore, other means are necessary for reducing the risk of a fire/explosion. These revolve around moderating the fuel and oxidizer concentration to avoid a flammable concentration of gases/vapors.

In the chemical industry, processing and handling of chemicals could result in the formation of a flammable or explosive atmosphere. For liquid chemicals, this may occur at temperatures other than at ambient conditions. Figure 1 shows the relationship between the flammable properties of a combustible chemical and how they are related to temperature. 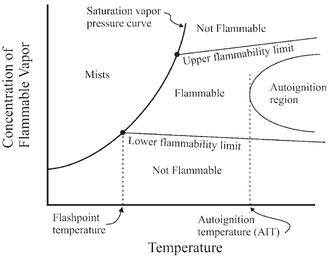 As you increase temperature and move along the vapor pressure curve for a flammable substance, there becomes a point where the concentration of the vapor is sufficient for producing a flammable mixture. This temperature is commonly known as the Flash Point (FP). In theory, the lower flammability limit (LFL) should intersect the vapor pressure curve at the flashpoint temperature; as a result this temperature is also referred to as the Lower Temperature Limit of Flammability (LTFL). However, these two temperatures, FP and LTFL, may not always be observed to be similar with experimental data. Knowledge of the disparity between these two points will help better assess the flammability hazards of a specific chemical as well as help implement the proper safety precautions during handling.

To understand the variation between the lower temperature limit of flammability and the flash point, tests were performed to compare the results. The lower temperature limit of flammability tests were conducted using ASTM E1232 “Standard Test Method for Temperature Limit of Flammability of Chemicals” modified to be conducted in a 5.3-L stainless steel spherical vessel using a fuse wire ignition source for safety and environmental purposes. The criterion for a positive ignition was a 7% pressure rise above the starting pressure. The flash point tests were performed per ASTM D3278 “Standard Test Methods for Flash Point of Liquids by Small Scale Closed-Cup Apparatus”. These tests were performed on 4 different chemicals and their results are summarized in Table 1.

The deviation between the values determined for these two tests is a result of differences in the test apparatus and methodology used in each of these experiments. Flammability limits are influenced by numerous factors and offer an explanation into the differences between the two test results:

3. Homogeneity of mixture – Slight changes in the vapor concentration could result in a mixture becoming flammable or not flammable. In the LTFL tests, the vapor mixture is stirred to provide a homogenous mixture of the fuel in air unlike the flash point tests where the vapor space is not stirred and thus concentration gradients my form. Furthermore, the LTFL tests provide a more uniform heating of the vessel as well as a longer mixing time to allow the vapor and the liquid to reach equilibrium. All of these factors will impact the concentration of the fuel in the vapor space, thereby, influencing the flammability results.

These results demonstrate that it is imperative to fully characterize the flammability hazards of chemicals. The use of the flash point by itself may not always be sufficient in providing proper safety precautions to avoid flammable temperatures when assessing the hazards of flammable liquids. As shown from the LTFL and FP tests, there can be large deviations between the two values. Therefore, the use of a safety margin with the flash point value may not always be adequate. A better approach would be to conduct a LTFL test to assess the temperature at which there is sufficient vapor for flame propagation.