The Sellafield site in Cumbria, UK, contains a number of legacy nuclear fuel cycle operations facilities within a relatively small footprint, including aging facilities with considerable nuclear waste inventory. Prominent among these are the Magnox Swarf Storage Silo (MSSS) and the First Generation Magnox Storage Pond (FGMSP). Fauske & Associates LLC (FAI) is assisting Sellafield Ltd in engineering evaluations for the accelerated removal of materials from these locations, including evaluation of the impact of reactive materials, potential for pyrophoricity, flammable gas hazards and contamination release.

The subject of this technical bulletin is the Sellafield application of the FAI aerosol methodology developed initially for light water reactor (LWR) safety evaluation. The introduction of this FAI methodology to Sellafield Ltd represents significant value added to the customer by transferring a well-known and pedigreed approach to the field of nuclear waste remediation. FAI has recently transferred this technology to MSSS and FGMSP personnel, where it has been used to quantify contamination releases during normal process operations.

The approach described here is broadly applicable to quantify contamination release during operations involving aqueous nuclear waste including wet sludge and other wet waste forms. Of course, the approach can also be applied to quantification of risk for accident scenarios.

Background on Sellafield MSSS and FGMSP

The MSSS facility consists of a number of vertical silo compartments containing a mixture of Magnox cladding in various stages of corrosion whose principle product is magnesium hydroxide, uranium, damaged partially declad Magnox elements and uranium metal carried over with the cladding along with uranium corrosion products, and metallic debris, graphite and cans containing miscellaneous waste forms. The majority of the waste volume is a high yield strength sludge formed from the corrosion products of the Magnox and uranium. A new MSSS sub-programme called the Alternative Intermediate Level Waste Approach (AILWA) is presently evolving the engineering design for an approach for accelerated removal of waste from the silos to an interim storage facility on the Sellafield site. This approach involves retrieving waste into skips containing approximately 1000 L of waste plus cover water, and transferring the skips into containers known as “3m3 boxes” (customer shorthand for 3m3) arranged in a stack array in interim storage vaults.

FGMSP is an outdoor fuel storage pool (pond in the UK parlance) containing a considerable inventory of spent Magnox fuel and corrosion product sludge. The vast majority of the fuel has lost its cladding due to corrosion, and the metallic uranium fuel itself is also in various stages of corrosion. Some fuel is contained in self-draining skips, i.e. skips that would drain as they are removed from the pond, and smaller highly damaged fuel pieces are contained in non-draining “bit bin” skips which would retain their water upon removal from the pond. FGMSP also holds a substantial number of non-draining zeolite skips which were used for removal of pond contamination, mainly cesium and strontium leached during fuel degradation. The accelerated removal option involves removing these kinds of skips from the pond, placing them into self-shielded boxes (SSBs) similar in size to the MSSS 3m3 box but with substantially thicker boundaries for shielding as the name suggests, and arranging the SSB’s in a stack array in interim storage vaults.

The MSSS and non-draining FGMSP skips share a common mechanism for the release of contamination, aerosol formation by the bursting of hydrogen bubbles at the cover water surface. This is a commonly encountered situation for aqueous nuclear wastes, where the hydrogen can be produced either by chemical reactions, by radiolysis, or both mechanisms. The MSSS 3m3 boxes and the FGMSP SSBs holding the waste skips will have filters to allow release of the hydrogen, pressure equilibrium during interim storage, and high-efficiency particulate (HEPA) attenuation of contamination release.

The FAI aerosol methodology will be explained first below, followed by a description of generic example application to MSSS and FGMSP contamination release and transport behavior during interim storage.

The FAI aerosol methodology was developed for the Industry Degraded Core Rulemaking Forum (IDCOR) program in the late 1980s in order to predict the behavior of fission product aerosols during LWR severe accidents. The methodology is based upon exact solutions to the integro-differential equation for the evolution of the particle size distribution (PSD) of aerosols. Details are found in (Epstein, Ellison, and Henry, 1986) and (Epstein and Ellison, 1988). The methodology is also described in an American Nuclear Society publication, (Sher and Hobbins, 2011).

The foundation of the methodology is the application of a mass balance on the total aerosol mass M suspended in a well-mixed volume,

In the mass balance, S is the aerosol source (kg/s), λS is the decay constant for aerosol settling (also called sedimentation), and λL is the decay constant for aerosol removal (leakage) by outflow from the volume. Other terms for aerosol removal by processes such as water vapor condensation and inertial impaction can be added to the mass balance as well. For a polydisperse aerosol (an aerosol with a PSD), the settling decay constant is given by a curve fit to the suspended mass. The suspended mass is given by exact solutions for the PSD as mentioned above. Also, given the suspended mass, the aerosol PSD can also be found. The correlations are universal because they are based upon scaling that considers factors such as the particle density, the viscosity and temperature of the gas in which the aerosol is suspended, the height for aerosol settling, coagulation efficiency factors and shape factors to account for asphericity of particles.

An example of validation of the methodology is shown in Figure 1. This figure shows the experimental data obtained by (Hilliard, McCormack, and Postma, 1983) for a sodium fire aerosol in a large vertical tank whose volume was about 850 m3. Also indicated are the exact solution using the FAI sectional aerosol model and the FAI aerosol correlation.

Simplification for Monodisperse and Lean Aerosols

For a monodisperse aerosol (single average particle size) or for a lean polydisperse aerosol in which particle coagulation may be neglected, the gravitational sedimentation constant λS is the deposition velocity us divided by the average settling height hu

The sedimentation velocity is given by Stokes’ law

where g = 9.81 m/s2 ,ρp is the particle density (kg/m3), d is the particle size (m), and μair is the viscosity of air, about 1.85x10-5 Pa-s (the gas viscosity will be essentially that of air despite small amounts of hydrogen and water vapor).

where QL is the volumetric rate of gas flow (m3/s) leaving the volume V (m3) in which the aerosols reside.

It is particularly of interest to note that in a steady state, which is of common interest for transport or interim storage of nuclear waste, the suspended mass is given by

Suppose the leakage occurs through a filter whose decontamination factor DF is known. The DF is the ratio of the aerosol emitted by the filter divided by the aerosol entering the filter. Then the source term of aerosols Wrel (kg/s) released from the filtered volume is

where the decontamination factor due to sedimentation within the volume is

where Φ = Relative humidity, Q=factor to account for ionic charges = 2 for NaOH, KOH, CsOH, ω=molecular weight (kg/mole), ρ=density (kg/m3), d=diameter (m), σ=surface tension (N/m), R=ideal gas constant (Pa- m3/mole-K), T=temperature (K), and the subscripts are “a”=aerosol meaning the original hygroscopic material, “w”=water, and “0”=seed based on pure hygroscopic solid material. The particle seed diameter d0 is given by the ppm of the impurities and the birth size of the droplet, which determines the mass and therefore the volume of the impurities in a droplet.

The FAI hygroscopic aerosol methodology for a lean aerosol uses the equation above to determine the equilibrium particle size, which is then used in Stokes’ law to yield the settling velocity and ultimately the settling decay constant. An example of the particle sizes that are obtained for various amounts of dissolved NaOH in a suspended aqueous waste droplet whose initial diameter is 3.2 micron is shown in Figure 2. For very low relative humidity, below 10%, the particle approaches its “seed diameter” and has very little water. For relative humidity approaching 100%, the particle size can approach the “birth diameter” that was assumed here, for the explored range of NaOH initial mass concentration.

For aqueous nuclear waste applications, the dissolved amount of radioactive substances such as 137Cs and 90Sr may be low, so it is important to consider the presence of all other dissolved impurities as shown in the example.

An example geometry for application of the FAI aerosol methodology to interim storage of nuclear waste is shown in Figure 3. In this example, the skip has a lid and a filter. Other arrangements of skips and their container boxes are illustrated in Figure 4.

Hydrogen gas is produced within the waste and continuously released, and aerosols are produced by the bursting of the bubbles at the cover water surface. The mass (or volume) rate of aerosol generation is directly proportional to the mass (or volume) rate of gas release when the bubbly flow regime pertains, see (Ginsberg, 1985) and (Garner et al, 1954). Also, the drop size spectrum has very few measurable particles of size less than 1 micron and greater than 10 microns in diameter. The geometric mean of this range, about 3.2 microns, is a conservative diameter to use for a source droplet because it is smaller than the volume average that would be obtained by assuming a uniform droplet PSD over the range.

For MSSS and FGMSP, FAI created detailed thermal and chemical reaction models for the waste during interim storage, and this modeling provided the technical basis for the waste and headspace temperatures, gas generation rates, breathing rates and relative humidities that are needed to apply the FAI aerosol methodology.

For the other geometry types shown in Figure 4, aerosol settling may also occur in the box outside the skip when there is a series arrangement of volumes. In this case, the source term from the skip to the box is the source of aerosols in the box, and the relative humidity, particle size, breathing rate and decay constants for leakage and settling will be different for the box than for the skip.

Application to interim storage vault contamination and release to environment

Outside the box within the interim storage vault, the same principles used above can be applied, see Figure 5. Aerosols released from a waste box can settle on the box top or leak into a well-mixed space between box stacks. Settling on the box top can be quantified by considering the volume between two vertically stacked boxes to be a well-mixed control volume. The volume and air flow rate within this horizontal gap define the leakage decay constant. The appropriate particle size is used to determine the settling velocity, and the gap thickness is the settling height, allowing the settling decay constant to be determined.

In the vault above the stack of waste boxes, aerosols released from within the box stack may be considered well-mixed so that the aerosol balance method can be applied to the vault as a whole. The vault volume and ventilation rate determine the leakage decay constant, and the appropriate particle size and settling height determine the settling decay constant.

Summary
The FAI aerosol methodology described here has been used at Sellafield Ltd to quantify contamination release during normal interim storage operations for wastes originating from MSSS and FGMSP, including the quantification of locally deposited and airborne contamination used to determine the contamination classification level of the facility, and to quantify emissions to the environment.

The same methodology can be generally applied for aqueous and wet sludge/saltcake types of nuclear waste process operations and interim storage for normal and accident scenarios.

The Sellafield Ltd customer has benefited from the transfer of this technology originally developed by FAI for LWR safety applications, and now used for nuclear waste remediation. 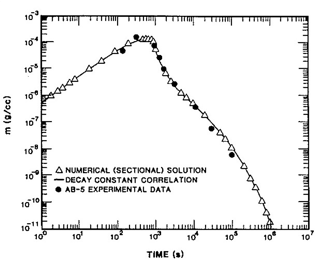 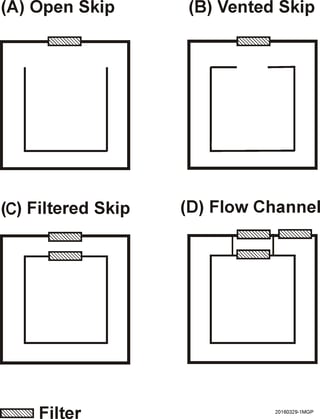 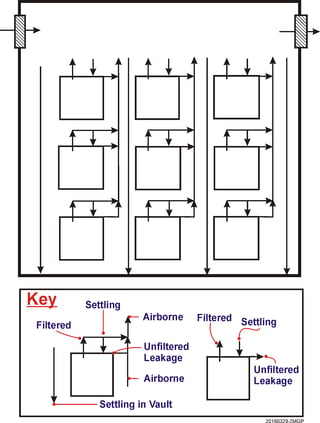