The most prominent feature of the Fukushima-Daiichi Unit 2 (1F2) accident was the operation of the steam turbine-driven reactor core isolation cooling (RCIC) system. The RCIC system operation was the singular injection system that maintained core cooling for nearly three days, until its unintentional termination ultimately lead to core damage and off-site fission product release.

The importance of this stage of the 1F2 experience from a safety perspective cannot be understated. For the first time in the known history of water-cooled power reactor operation, a full-scale BWR-4 reactor system was tripped and sub-critical (as designed) but was otherwise uncontrolled and outside its design basis in regard to its safety injection and emergency core decay power removal functions. Associated safety systems had been rendered inoperable, particularly turbine-driven high-pressure coolant injection (HPCI), which is relied upon for at least the short-term 4-hour coping window of operation during a station blackout (SBO). The BWR-4 design has no dedicated passive features for these functions. However, the unit itself initiated stable passive injection and decay power removal through the RCIC system. 1F2 successfully discharged two-phase (steam-water) flow through the RCIC turbine, and the turbine operation sustained RCIC pump operation, even though the turbine is designed for single-phase steam only. BWR-5 and BWR-6 designs are similar to BWR-4 in this regard, and these three designs account for the vast majority of BWR plants, thereby emphasizing the broader significance of the 1F2 experience.

This operating state was a surprising outcome. The specific turbine design, termed a Terry turbine, is known to be tolerant of intermittent two-phase transient flow due to transport of individual water slugs. The slugs may accumulate due to unintended condensation in the line. The slugs may then be entrained by high-velocity steam flow into the turbine during system startup. Once the slugs are expelled, the line quickly returns to single-phase steam operation. However, such transient anomalies are far different from the sustained operation of very low quality (high water content) two-phase flow that characterized the 1F2 RCIC turbine operation. Specifically, after the tsunami inundation event, RCIC operated in an unpowered, unattended mode. The unpowered state entailed loss of reactor pressure vessel (RPV) water level control, which resulted in water level rise and the flooding of the main steam line, including the steam extraction line that drives the RCIC steam turbine. The resulting two phase flow drove the turbine for nearly the entire extended duration. This operating state had never been experienced or even analyzed since it is effectively ruled out by the control system design during normal powered operation.

As part of the recent MAAP5* code enhancement project, FAI investigated the mechanics of the RCIC steam extraction line and Terry turbine to explain the combined RCIC and reactor pressure vessel (RPV) response. The objective of the project task was to increase the fidelity between the 1F2 RPV pressure measured data and the MAAP5 simulation of the 1F2 accident progression. The investigation encompassed normal single-phase steam operation, which characterized normal RCIC operation between reactor trip (due to the seismic initiating event at 14:46) and the station blackout (SBO) initiation (due to the tsunami inundation at 15:38). The investigation also encompassed the transition to two-phase flow RCIC turbine operation after SBO initiation.

Single-phase steam jet formation and impingement on the turbine wheel “buckets” is a fundamental design principle within a Terry turbine. However, the additional related phenomenon of free-stream depressurization of an under-expanded two-phase critical flow jet was an unknown phenomenon in system operation because the system has never encountered this circumstance. This was a key discovery in the explanation of the turbine operation. The phenomenon is a natural extension from the single-phase steam jet formation during normal turbine operation. However, a two-phase jet has significant differences that must be accommodated. Specifically, in Figure 1, the decrease in void fraction to a value less than unity signals the onset of two-phase flow through the RCIC steam extraction line. Consequently, the “Extraction Flow” through the extraction line increases, but the “Pump Flow” decreases. The transition from a single-phase steam jet to a two-phase jet at the RCIC nozzles reduces the sonic velocity at the nozzle exit. This actually reduces the momentum flux driving the turbine even though the fluid density is increasing markedly. The reduced momentum decreases the pump shaft power and therefore the pump flow rate.

This self-regulating behavior of the RCIC with the RPV was highly successful in predicting the RPV pressure and water level measured data response from the early SBO initiation through to the RCIC system unintended isolation event nearly 3 days later. Figure 2 shows the MAAP 5.04 RPV pressure comparison with 1F2 measured data. The agreement is excellent from 3/11/11 14:46 (simulation time zero) to 3/14/11 13:00 when the RCIC extraction line isolates. The pressure dip and re-ascension at 3/11/11 16:00 is due to the onset of two phase flow in the RCIC extraction line. The temporary pressure re-ascension at 3/12/11 04:30 is due to the switch of RCIC suction from the relatively cold condensate storage tank (CST) to the relatively warm suppression chamber (S/C) pool. (By this time in the accident, operators at least had the ability to monitor CST level and switch suction to the S/C pool.) The agreement in long-term pressure continues for the remainder of the RCIC operation (until 3/14/11 13:00) and for the balance of the mission time.

Figure 3 shows the RPV water level comparison with 1F2 measured data. The RCIC model correctly predicts the rapid ascension of water level to the main steam line elevation at 7.25 m above the top of active fuel (TAF). Water level remains roughly constant at the main steam line elevation for an extended duration as a consequence of pump inflow equilibrating gradually with extraction line outflow. This prediction is in agreement with the “RPV Level A (Corrected)” measured data, but the data cannot achieve the actual 7.25 m elevation because the instrument is electronically saturated at 6.0 m, as confirmed by plant operator TEPCO. In reality, the level must have reached 7.25 m to produce the two-phase flow into the extraction line.

The increase in RPV pressure measured data at 3/14/11 09:00 is due to transition from two-phase flow to singlephase steam in the RCIC extraction line. This transition is the key indicator of loss of vessel injection. When the injection to the RPV is terminated at 3/14/11 09:00, the subsequent RPV water level decrease until 3/14/11 18:30 is in excellent agreement with the measured data. Comparison beyond 3/14/11 18:30 is outside the scope of the RCIC portion of the 1F2 simulation.

This fundamental explanation of the RCIC operation under two-phase conditions provides a compelling technical basis that unpowered, unattended, long-term operation is a probable outcome. Thus, the 1F2 experience was not an anomaly but rather a now-known and inherently stable operating state that can be utilized in decisionmaking within the industry practice of PSA, SAMG, and FLEX. Also, the envisioned need for expensive, dedicated full scale RCIC operational experiments to reveal the contributing phenomena are now rendered largely unnecessary since the established phenomenology and the 1F2 experience itself already provides the necessary insights.

There was one final insight from the investigation. While not specifically confirmed, it is proposed that the ultimate RCIC system termination may have not been RCIC system equipment failure (as had been initially surmised). Rather, in view of the knowledge gained, the forensic evidence within the plant data indicates a different conclusion. As noted above, the re-ascension in RPV pressure at 3/14/11 09:00 is a return to singlephase steam operation in the RCIC extraction line. This means that the RCIC pump was no longer injecting into the RPV. However, this does not necessarily mean that the pump failed. Rather, it is known that operators were trying to re-establish DC power (via scavenged automobile batteries) to the RCIC system (and other critical plant systems) to gain control of the RCIC operation. However, this may have had the unintended effect of terminating injection. With the partial recovery of DC power, the RCIC system may have sensed that the RPV water level was above Level 8 (high level setpoint), and RCIC may have realigned pump discharge in an attempt to mitigate the high level. (This postulated scenario needs to be confirmed.)

Furthermore, the abrupt increase in RPV pressure at 3/14/11 13:00 is indicative of an orderly isolation of the RCIC steam extraction line. Like the injection termination cited above, the isolation of the extraction line may have been an unintended effect of DC power recovery. The RCIC system would have sensed that the primary containment vessel (PCV) had a high pressure (due to the absence of containment heat removal induced by the station blackout). If RCIC senses high exhaust pressure in the PCV suppression pool (which receives the RCIC turbine exhaust), then RCIC will isolate the extraction line.

Therefore, while unconfirmed, it appears that the ultimate termination of both the RCIC pump and RCIC turbine may have been due to the efforts to recover DC power. While ironic, this is not an unexpected result, and the reactor operators could not have anticipated this consequence. The RCIC system design protections for water level control and exhaust pressure control were never intended to accommodate the previously unknown contingency of sustained passive RCIC operation experienced at 1F2. These lessons learned have been provided to the BWR Owner’s Group (BWROG), and design changes to RCIC and HPCI protection logic are being considered so that these turbine-driven systems will not self-terminate when they are performing a critical function under extraordinary beyond-design-basis circumstances.

The above assessment combines our detailed understanding of Fukushima-related BWR plant systems and accident procedures with the well-suited integral code MAAP. The resulting root cause explanation of successful long-term passive injection and core cooling is a crucial insight because RCIC resides in most of the existing BWR fleet. So, if confronted with the highly unlikely Fukushima-like extended loss of AC power (ELAP) event in the future, passive RCIC operation can cope with the ELAP for multiple days as an embedded “defense-in-depth” layer until the newly-implemented flexible response (FLEX) countermeasures for ELAP can provide alternate cooling. This robust, diverse response to ELAP would achieve a wholly different outcome than the severe accident fate that befell Fukushima and is a significant advancement in safety which reflects favorably on the existing BWR fleet. 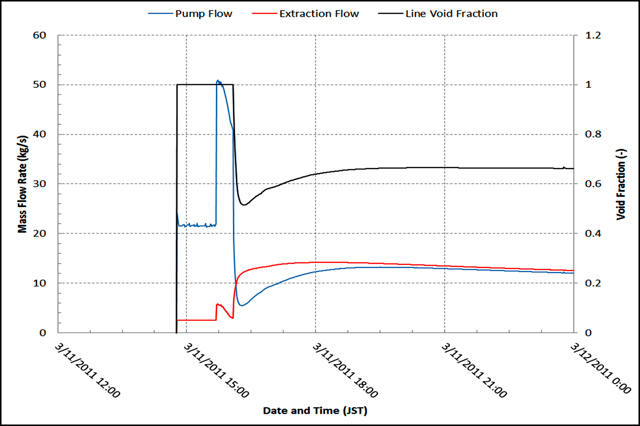