Integrating MAAP With Other Software Using the MAAP API 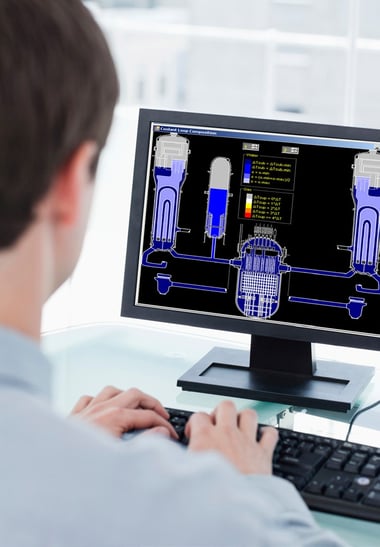 accident analysis for nuclear power plants including assessments of core damage and radiological transport. A valid license to MAAP 5.0 from EPRI for customer’s use of MAAP 5.0 is required prior to a customer being able to use MAAP 5.0 or incorporate MAAP5 into a simulator. Such implementation requires not just knowledge about the software operation, but also an understanding of the uncertainties associated with severe accident progression.

Fauske & Associates, LLC (FAI) has helped many nuclear utility-based customers to integrate the MAAP software into nuclear power full scope simulators (working synergistically with the nuclear plant’s probabilistic risk assessment, or PRA group), and to integrate more detailed plant software in lieu of MAAP models for things such as the balance of plant (BOP) and engineered safeguard features (ESF).

The Modular Accident Analysis Program (MAAP) – an EPRI owned and licensed computer software – is a fast-running computer code that simulates the plant response to various accident transients (both severe and abnormal) for light water and heavy water moderated nuclear power plants, for both current designs and many Advanced Light Water Reactor (ALWR) designs. Available for the LWR MAAP 5.04 and later (Windows) versions, the MAAP API (Application Programming Interface) allows MAAP software to be integrated out-of-the-box into a nuclear power plant (NPP) full scope simulator, or another executive software. Typical MAAP runs involve an end user clicking a “Start” button, and waiting for the MAAP run to finish. Using MAAP as an integrated software module allows an end user to have much more detailed control over MAAP execution, controlling its state during each time step. The end user can control when the MAAP simulation timestep is advanced, or change any MAAP input, at any time during the simulation, without primarily relying on text files to define MAAP sequence progression.

Nuclear power plant full scope simulators (FSS) vary in simulation domain, and may or may not have the ability to model severe accidents. FAI has helped integrate the MAAP software into numerous FSSs, to allow for operator training beyond reactor core uncovery, heatup, and degradation of the nuclear fuel and fuel cladding. The MAAP software can be used to show simultaneous responses of multiple NPP units, as well as the spent fuel pool (subject to modeling limitations associated with common junctions between units).

Occasionally, users may want to bypass parts of the MAAP software, potentially running other software side-by-side. The MAAP API can be used to easily enhance a portion of the MAAP software that requires more detailed analysis. For example, detailed codes are able to model NPP engineered safeguard fidelity beyond common MAAP usage requirements. With the MAAP API, FAI can join the two (or more) codes in a very cost-effective way, reducing the transitions between those codes to an information statement that an end user of the combined code will see in an output file (i.e. the transition between codes/models is invisible to the user).