During shutdown conditions, the severe accident progression is not very sensitive to the initial water level in the vessel except with regard to the time of core uncovery and core damage. However, the thermal hydraulic conditions in the primary system, steam generators, and containment can affect the SAMG actions and progression of the accident. If mobile equipment is unavailable for an extended loss of AC power (ELAP) during shutdown conditions with an open RCS (pressurizer or steam generator manways are open), establishment of gravity injection from the refueling water storage tank (RWST) or condensate storage tank (CST) into the RCS can be an important operator action.

An example analysis of gravity injection during an extended loss of AC power (ELAP) is shown for how MAAP5 was used for shutdown SAMG development. Three sample MAAP runs were performed for a typical Westinghouse type four loop plant:

The runs were stopped when the core exit temperature exceeded 1200 °F. An analysis of the results is provided in the following paragraph.

In most conditions, the pressurizer surge line is flooded and water drainage from the pressurizer to the hot leg is prevented. However, the pressurizer level decreases from time to time due to counter-current water drainage when the core is uncovered. Figure 1(c) shows the containment pressure. Without the containment vent, high containment pressure prevents gravity injection. For the other two cases, an 8” containment vent line was opened at 3 psig and remained open throughout the remainder of the sequence. Figure 1(d) shows the hottest core node temperature. The number of lines used for gravity injection makes some difference in the pressurizer water level and timing of core uncovery. However, the general responses between two cases are similar. For the case with two injection lines, the run is stopped because the core exit temperature exceeded 1200 F.

The success of gravity injection during an ELAP with the pressurizer manway open depends on several plant specific factors: 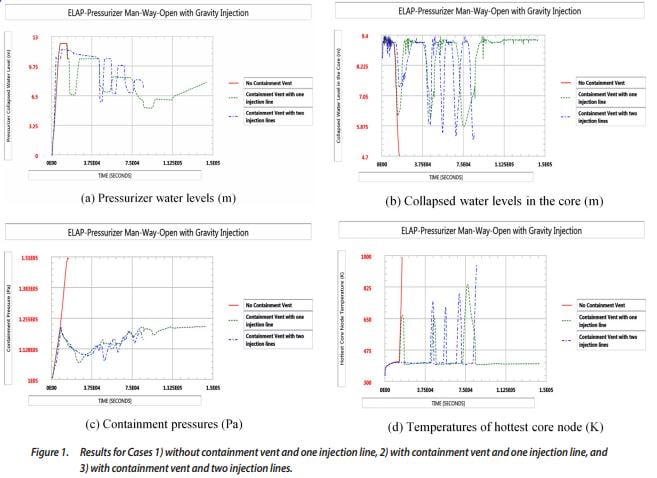 In the samples above, MAAP5 was used to predict the primary system and containment response to gravity injection during an ELAP with and without containment venting and at various injection flow rates. Analysis can also be done to determine timings of events such as timing of core uncovery and time to vent the containment for various scenarios such as:

The insights from plant specific MAAP5 calculations similar to the sample calculations can be used to guide SAMG development.