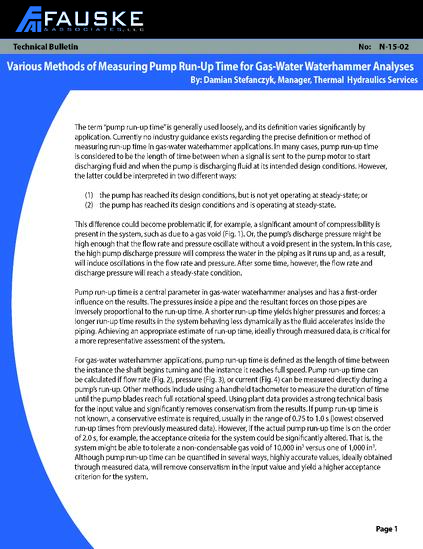 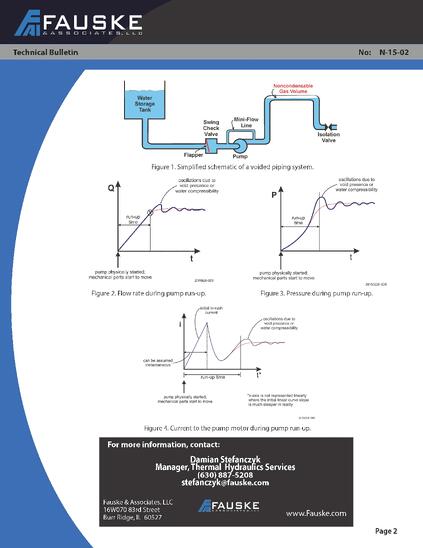 The term "pump run-up time" is generally used loosely, and its definition varies significantly by application. Currently no industry guidance exists regarding the precise definition or method of measuring run-up time in gas-water waterhammer applications. In many cases, pump run-up time is considered to be the length of time between when a signal is sent to the pump motor to start discharging fluid and when the pump is discharging fluid at its intended design conditions. However, the latter could be interpreted in two different ways:

(1) the pump has reached its design conditions, but is not yet operating at steady-state; or

(2) the pump has reached its design conditions and is operating at steady-state.

Pump run-up time is a central parameter in gas-water waterhammer analyses and has a first-order influence on the results. The pressures inside a pipe and the resultant forces on those pipes are inversely proportional to the run-up time. A shorter run-up time ylelds higher pressures and forces; a longer run-up time results in the system behaving less dynamically as the fluid accelerates inside the piping. Achieving an appropriate estimate of run-up time, ideally through measured data, is critical for a more representative assessment of the system.

For gas-water waterhammer applications, pump run-up time is defined as the length of time between the instance the shaft begins turning and the instance it reaches full speed. Pump run-up time can be calculated if flow rate (Fig. 2), pressure (Fig. 3), or current (Fig. 4) can be measured directly during a pump's run-up. Other methods include using a handheld tachometer to measure the duration of time until the pump blades reach full rotational speed. Using plant data provides a strong technical basis for the input value and significantly removes conservatism from the results. 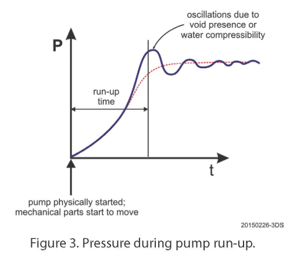 If pump run-up time is not known, a conservative estimate is required, usually in the range of 0.75 to 1.0 s (lowest observed run-up times from previously measured data). However, if the actual pump run-up time is on the order of 2.0 s, for example, the acceptance criteria for the system could be significantly altered. That is, the system might be able to tolerate a non-condensable gas void of 10,000 ins versus one of 1,000 ins. Although pump run-up time can be quantified in several ways, highly accurate values, ideally obtained through measured data, will remove conservatism in the input value and yield a higher acceptance criterion for the system. 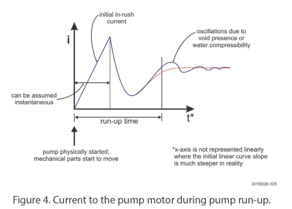