The spent fuel pool is a plant system which provides cooling of full or partially irradiated fuel rods. 10 CFR Part 72 requires that spent fuel cladding be protected during storage against degradation that leads to gross ruptures. Nuclear fuel cladding has been shown to degrade and rupture at high storage temperatures; therefore assemblies are stored in a large pool of water until the assembly decay heat is low enough for packaging and transportation to an ultimate repository or temporary dry storage. Figure 1 provides a representative spent fuel pool with a checkerboard loading pattern. The checkerboard loading pattern is used to provide spacing of the relative hot and reactive assemblies (red) by placing the cooler (blue and yellow) assemblies or empty (white) rack locations in-between. 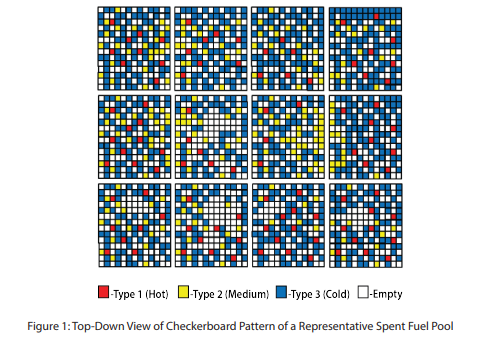 Recent industry events have shown that during beyond design basis accidents there is a potential for the fuel in the spent fuel pool to heat up, fail, and release radioactive material to the environment. With the current state of an ultimate fuel repository in question, in the US, many utilities have looked to temporary storage solutions of spent fuel. These temporary options include dry storage, expansion of current pool inventories, and or shipping of fuel to other reactor sites for temporary storage.

Dry fuel storage is expensive (construction, analysis, and licensing costs) and can only be used when the decay heat has been significantly reduced through radioactive decay. Therefore, this option is usually used as a last resort option for the temporary storage of spent nuclear fuel. A more efficient and less costly method of spent nuclear fuel storage is to expand the capacity of the current spent fuel pools. In order to expand the current pool inventories, many utilities have used the advancements in neutronic and thermal hydraulic models and calculations to refine earlier analysis. This has lead to the development of high density spent fuel pool racks. High density fuel racks allow for fuel to be stored closer, thereby increasing the number of assemblies which can be stored in the pool, without violating the criticality or temperature limits of the system.

Due to the recent industry events, several utilities have undertaken initiatives to understand how the fuel stored in the spent fuel pool would behave under a beyond design basis accident. Accidents in the spent fuel pool are different from accidents in the reactor due to the large thermal inertia in the spent fuel pool water and the lower initial decay heat in fuel assemblies. Additionally, transient analysis of the spent fuel pool is complicated by the fact that multiple fuel designs, power levels, and irradiation times are present in the stored nuclear fuel. The Modular Accident Analysis Program (MAAP), which is owned by the Electric Power Research Institute (EPRI) and developed and maintained by Fauske & Associates LLC, is a program which has the ability to model the transient response during severe accident scenarios in the spent fuel pool. This model includes the initial fuel heat up upon loss of cooling, zirc-air/steam oxidation phenomena, fuel melting, Molten CoreConcrete Interaction (MCCI), and fission product release. The spent fuel pool model was first included in MAAP5 Version 5.01 and has been continuously improved in later versions.

Figure 2 and Equation 1 provide a simplistic model of the calculations which are considered in the MAAP simulation. Figure 2 and Equation 1 show that the pool heat Qpool is determined by the radiation heat transfer (Qrad) from the uncovered portion on a fuel rod, the convection heat transfer (Qconv,steam & Qconv,H2O) for both the steam and water portions, and the heat loss terms due to pool boiling (Qboil), and the spent fuel pool cooling system (Qcooling). This figure and equation provide a simplified analysis of the overall phenomena which occur during a severe accident in the spent fuel pool. 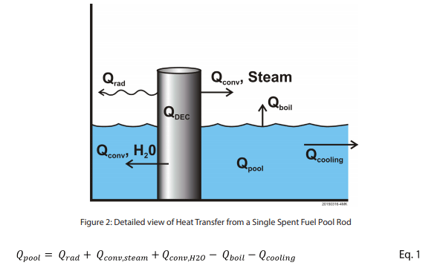 The MAAP spent fuel pool model has the ability to model transient and accident conditions which may occur in the spent fuel pool at nuclear reactor sites. The model also contains the ability to specify emergency cooling operations. These emergency operations can be either designed safeguards features or can be aligned under the sites emergency or FLEX strategies. Many utilities are interested in the timing of an accident mitigation system in order to prevent fission product release. 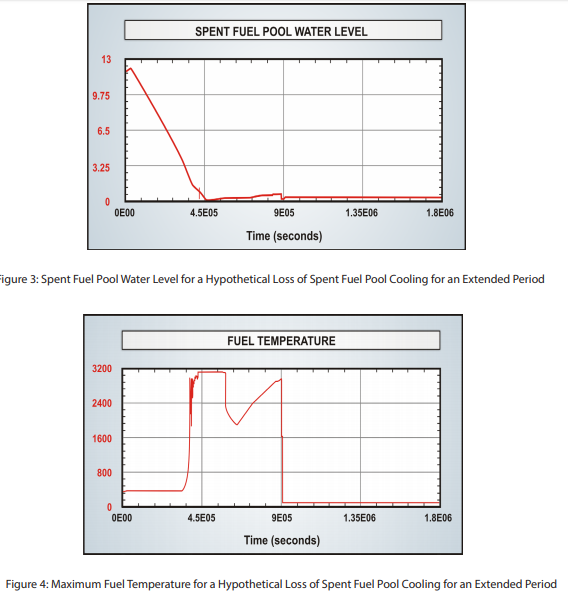 For further information, questions, or to inquire as to how Fauske & Associates, LLC can assist you in analysis of spent fuel or the spent fuel pool system please contact us at info@fauske.com.