Modular Accident Analysis Program (MAAP), which is owned by the Electric Power Research Institute (EPRI), is a computational tool that the nuclear industry has relied on for over 30 years to resolve not only severe accident issues, but also operational issues associated with nuclear power plants. Today, MAAP is primarily used within utility PRA (Probabilistic Risk Assessment) groups. Within PRA organizations, MAAP is typically used to perform thermal-hydraulic analyses in support of PRA Level I and Level II 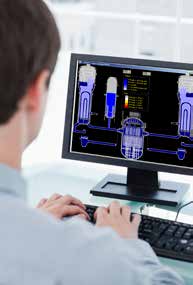 analyses. For the Level I analyses, MAAP is used in the determination of success (i. e., is core damage avoided?) based on equipment performance. MAAP is also used to determine the time available for sensitive operator actions, which is an input to the human reliability analyses (HRA). The MAAP models of the Reactor Coolant System and complex thermal-hydraulic phenomenon are important for these analyses.

For the Level II analyses, MAAP is used to assess the performance of the containment and its support systems, with the focus on accident sequences that could lead to a large breach early in the accident. The MAAP models of the Reactor Coolant System mass/energy releases, containment heat removal processes through multiple systems and heat exchangers and the containment heat-up phenomenology are all important for these analyses.

Many of these models have been updated since the release of MAAP4 and can provide more realistic predictions of the plant performance during a postulated accident.

A current issue within the nuclear industry is that the majority of nuclear plant PRA models are based on results from older versions of the MAAP4 computer code (i.e., MAAP4.06, MAAP4.07, etc.). There were few modeling differences associated within each minor version of MAAP4. However, over the past 10 years, EPRI has released a new version of MAAP called MAAP5 which has numerous improvements and new modeling capabilities associated with it. Significant differences are summarized below to assist in the recognition of the benefits of updating plant PRA models to use results from MAAP5.

1. MAAP4 development is no longer supported by EPRI. Thus, for any issues that arise in the future (e.g. SFP analyses, containment venting, low power shutdown analyses, etc.), MAAP4 will not have the modeling capabilities sufficient to address them. The only support EPRI currently provides associated with MAAP4 is direct utility support for user questions only.

3. MAAP5 includes several model upgrades to assess the effects of severe accidents, including those affecting the spent fuel pool:

4. In terms of licensing, the majority of the US utilities have already purchased MAAP5 licenses; therefore, the only new cost associated with updating to MAAP5 is the upgrade of the existing MAAP parameter file to MAAP5. Depending on the scope and quality of the existing MAAP4 parameter file and its supporting documentation, the cost associated with such an upgrade is generally around $50K (not including add-ons such as dose, SFP model, neutronics, detailed design-basis containment model, or other improvements that are not directly applicable to most PRAs).

5. Additionally, almost all European and Asian MAAP users are already using MAAP5, and thus, they are indirectly in control of further MAAP5 development (in terms of prioritizing what improvements and model enhancements get funded by EPRI).

In summary, MAAP5 has more realistic models, both in terms of nodalization and phenomenological models, of the Reactor Coolant System, containment, support systems and spent fuel pool. These more realistic models generally all use relaxed equipment performance requirements and relaxed operator response times. However, there are differences in each plant’s thermal-hydraulic model and PRA model, making the exact benefit for a specific plant impossible to quantify a priori.

One final consideration is that if the PRA models success criteria and operator response times are based on MAAP4 or older versions, it is likely that these analyses are at least 10 years old, and there may have been changes to the plant design and operator response capabilities that are not reflected in those thermal-hydraulic analyses. An update, or, at the least, some selective benchmarking, is likely necessary to maintain consistency with current standards for the scope and quality of the PRA models.