Some Plain Talk Regarding Water Hammer

Water hammer events come in several classes. The most common types of water hammer involve a column closure. This occurs in a system that has the potential to drain down following a pump trip, forming a vacuum at elevated high points. When the pump is restarted, the system will refill and a water- water impact will occur when the high points refill. This type of event is common in cooling water systems where the water supply is at a low elevation, and the cooling system feeds components at elevations 33 feet or higher. 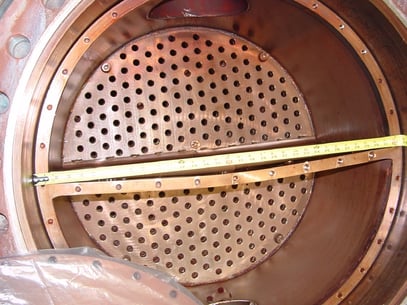 This type of event can be characterized by the Joukowsky equation, which relates the pressure rise due to water hammer to the product of the density, the velocity of the fluid at impact, and the acoustic velocity of the fluid, all divided by a factor of two to account for a water-water impact. These types of events typically experience runout of the pump, causing the closure velocity to be 10-30% higher than nominal operating velocity.

Another variation of this occurs in Boiling Water Reactor (BWR) Emergency Core Cooling Systems (ECCS). Since these systems typically have a suction supply from the suppression pool, they normally employ a “keep fill” system consisting of a pump that maintains a positive pressure on the system preventing any drain back. If this system fails, a drain down of the upper elevations is possible and if an ECCS injection signal occurs, a water hammer will result when the ECCS pump starts and rapidly refills the voided piping.

Another type of water hammer that occurs in water filled systems results from the rapid closure of a valve on a flowing system causing a fast stagnation of the flow. If the closure time is less than 10 times the acoustic path length (defined as the piping length divided by the acoustic velocity) a propagative wave (water hammer) will result. An example of this type of event is a rapid closure of a ball valve by an operator on a flowing system. If the close is in a slow and deliberate manner, there would be little or no propagative effects since the flow would be throttled gradually. If he were to snap the valve shut rapidly, a significant water hammer is the likely outcome since the flow would be stagnated immediately. The Joukowsky equation also applies to this case, but the factor of two in the denominator is replaced by unity since there is no cushioning due to a water-water impact. Thus, this type of water hammer will yield twice the pressure rise as a column closure event, for the same closure velocity. Of interest in this type of event is that the rapid closure actually causes two water hammers, one against the upstream face of the valve that propagates backwards, and a vapor pocket collapse on the downstream face of the valve that propagates forward. This type of event can be very serious in large service water or circulating water systems that employ motor operated butterfly valves. A failure in the motor operator (shaft shear or gear strip) can allow the butterfly to be forced closed rapidly by the flow, with disastrous result.

The worst types of water hammer result from steam condensation events. These types of events require a situation where a cold water slug interfaces with a steam pocket, causing rapid condensation of the steam and acceleration of the fluid into the collapsing void. These events require at least a 20˚C temperature difference between the steam temperature and the liquid interface. Examples of these types of events include a relief valve discharging to a pool of cold water. When the relief valve closes, cold water can rapidly enter the discharge line and condense the steam in the line. This type of application typically requires vacuum breakers to preclude condensation water hammer events. Another example is the refill of a steam filled line with cold water. If a long horizontal run (L/D>24) is filled with cool water, there is a potential to trap and condense a steam pocket at the top of the run, causing a rapid condensation event and resultant water hammer. It is of interest to note that these types of events can be “powered” by the condensation process, and may not require an active pressure source to drive the event. Given this, it is entirely possible to experience significant condensation water hammer in passive systems (e.g. BWR isolation condenser), as well as in active systems. Steam condensation events can be an order of magnitude greater than the previously described events, and need to be taken very seriously.

The last class of water hammer events involves non-condensable gas appearing in a system that is intended to be nominally water solid. This situation normally occurs as a result of inadequate venting following a maintenance situation. It can also occur as a result of dissolved gas leaving solution and accumulating in high points. This situation is particularly of concern in Pressurized Water Reactor (PWR) Residual Heat Removal (RHR) systems when back leakage from accumulators pressurized with nitrogen to approximately 600 psig can release significant amounts of gas to the high points. Startup of an ECCS pump with non-condensable gas accumulated in the discharge line high points can result in dynamic events due to the compressibility of the gas. These events are typically less severe than any of the previous examples, but may still result in challenges to relief valves as well as cause dynamic loads on the piping system.

While the axial forces and piping reactions are a principal result of water hammer, they are not the only issue of concern. The transient pressure wave can challenge many components in the piping system. These include relief or safety valves, heat exchangers, flange gaskets, and instrumentation. The effects depend on the magnitude and duration of the pressure wave as well as physical geometry and susceptibility of the components. A pressure wave transiting from a large pipe to a small pipe will amplify, and can double the pressure amplitude. Heat exchangers are particularly susceptible to damage at the channel head, since this structure typically is not designed with large transient differential pressures in mind. Also, heat exchanger tubes that have undergone degradation due to corrosion may fail when challenged by a water hammer event. Gasket materials at flanges can be extruded from the flange as a result of pressure surges and leakage will result. Following a water hammer event in a plant system, it is important to assess not only the piping and supports, but also any components that could have sustained damage.

Given the range of potential issues that arise from water hammer, the best practice is to mitigate or eliminate the possibility of experiencing such events. This can be accomplished with vacuum breakers in some cases, or by slowing the rate of fill of a system following a potential drain down event. Proper maintenance of valve operators can help prevent failures that can yield water hammer events. For steam condensation events, the best approach is often to modify operating procedures to preclude the conditions that can lead to an event. This requires critical review of the system and operating procedures under normal and emergency conditions.

Please check the Web Directory Blog to find our blog