The Flammability Testing and Consulting Services department at Fauske & Associates, LLC (FAI) has increased our testing scope once again. We are now able to offer Koenen Testing. This test is used to measure the sensitivity of a solid or liquid sample to intense heat with varying confinement.

The Koenen Test apparatus at FAI meets the requirements for test methods listed in the United Nations’ Recommendations on the Transport of Dangerous Goods Manual of Tests and Criteria and the European Parliament’s Council on the Registration, Evaluation, Authorization and Restriction of Chemicals (REACH).  In the UN Manual, the Koenen test methods are Test 1(b), Test 2(b) and Test 8(b), while the test method in REACH is A.14 Explosive Properties found in the Official Journal of the European Union. Based on the test results from these procedures, shippng classifications can be determined as well as the limiting diameter.

The sample is placed in a non-reusable tube with a reusable collar fitted with a standard orifice plate ranging from a 1 mm diameter up to a 20 mm diameter, through which the decomposition gases are vented. The tube assembly is then placed in the Koenen Test Apparatus, which is contains four propane burners housed in a support frame which encloses the test tube on three sides and the bottom. The tube assembly is then exposed to direct heat from the four burners until the tube ruptures or five minutes have expired, whichever comes first. The results of the test are based on how and if the tube ruptures during testing and at what orifice size.

Possible effects of heating under confinement according to the Recommendations on the Transport of Dangerous Goods Manual of Tests and Criteria:
“O”: Tube unchanged
“A”: Bottom of tube bulged out
“B”: Bottom and wall of the tube bulged out
“C”: Bottom of tube split
“D”: Wall of tube split
“E”: Tube split into two fragments
“F”: Tube fragmented into three or more mainly large pieces which in some cases may be connected with each other by a narrow strip
“G”: Tube fragmented into many mainly small pieces, closing device undamaged
“H”: Tube fragmenting into many very small pieces, closing device bulged out or fragmented

Figure 3: Tube that underwent effect “A” 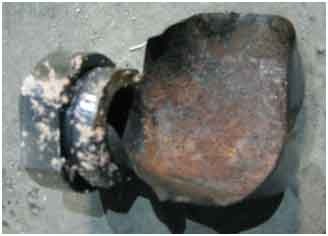 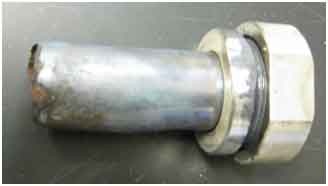 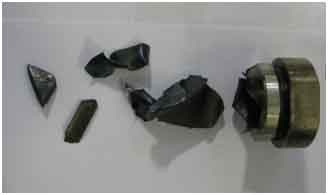 Figure 2 through Figure 6 are pictures of results we typically see at FAI. Tests that result in “O” to “E” effect are regarded as “no explosion” according to the UN standards. UN Division classifications are made based on results with a limiting diameter- the largest diameter of the orifice plate used which results in an explosion.

The REACH method for thermal sensitivity uses the 6.0 mm and 2.0 mm diameter orifice plate. Classifications are based on whether or not an explosion occurs at either of these conditions. This test is part of the Explosive Properties test series, which includes tests to determine mechanical sensitivity with respect to both shock and friction.

For more information regarding the testing of flammable liquid, gasses or vapors, combustible dust or other facility safety and process safety testing or management, please email info@fauske.com.