Large diameter thin-walled steel tanks are common for fuel and oil storage, particularly in the petroleum industry. The American Petroleum Institute (API) 650 standard is an industry standard on the design of such tanks. Until recently, code provisions were oriented towards the design of tanks operating at high levels of liquids. The emphasis was on preventing failure modes associated with yielding of the shell; thus, the majority of existing tanks were constructed with variable shell thicknesses with tanks getting thinner near the top. However, when these tanks are empty, they are very susceptible to bucking due to high wind loads, particularly on the thin upper shell courses. This was exemplified after Hurricane Katrina and Rita, during which many such storage tanks were damaged due to buckling. To account for the structural stability of the upper shell courses, stiffening rings (commonly called wind girders) are used to reduce the buckling length.

The API-650 standard deals with this problem using empirical design methods for stiffening the tank based on the tank’s thickness, height, and design wind speed. Other codes, such as the more recent EN1993-1-6 European standard, provide analytical relationships for evaluating buckling by verifying the design stresses. However, both standards have been criticized and can provide contradictory results.

In a recent project dealing with an oil storage tank at a nuclear plant, both the API-650 and the finite element software Abaqus was used by Fauske & Associates, LLC (FAI) to evaluate the tank. For the Abaqus analysis, a model of the tank was created using swept hex elements and material properties were defined. Next, a wind load distribution was applied to the exterior of the tank. Wind loads on a tank are asymmetrical as can be seen in Figure 1 below. One method to determine the loading distribution would be to use a scaled model and measure the pressure at various locations (using dimensional analysis techniques). Tanks with a similar height to diameter ratio will have a similar loading distribution. Thus, a literature search was conducted and an appropriate wind load profile was found and inputted into Abaqus. Once the loading was defined, appropriate boundary conditions were applied and a static analysis was performed.

The tank that was analyzed did not have a wind girder, so a static analysis was performed both on the as-designed tank along with a modified tank with a wind girder. Both stresses and displacements were solved for, as can be seen in Figure 2. Using the results of both the finite element analysis along with the empirical methods in the API650, FAI was able to make recommendations to the customer to safeguard their fuel storage tank from buckling when it operates at low liquid levels. 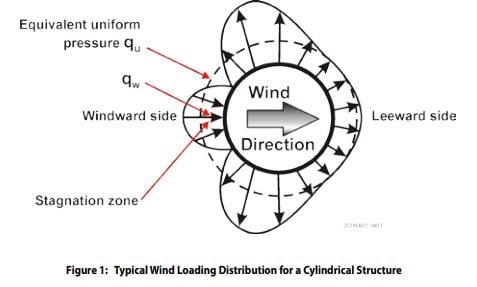 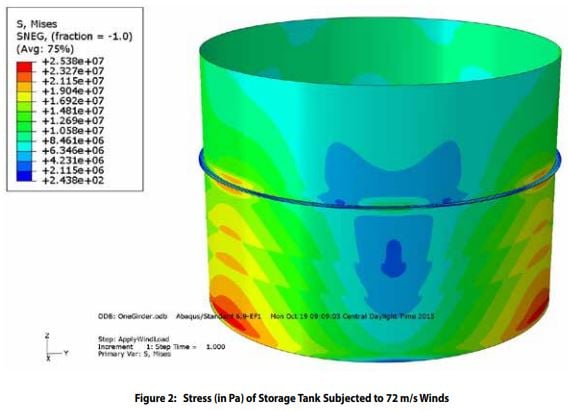