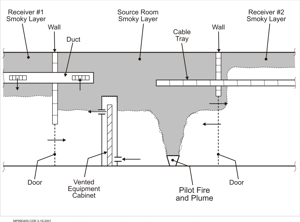 A severe accident at a nuclear power plant can lead to core fuel damage with the potential to release contamination and hydrogen (H2). Such a scenario can be initiated by a so-called extended station blackout (SBO) event such as occurred at Fukushima.  Subsequent release of H2 into the containment or adjacent buildings can (in the absence of interting) cause a combustible mixture of gases to develop. Containment safety analyses and emergency planning have traditionally addressed this possibility.  Furthermore, it is increasingly recognized that the potential threat to structures and personnel can occur for any highly compartmentalized adjacent structures to which the hydrogen can migrate, accumulate and potentially ignite (for example, the auxiliary or reactor building).

Fauske & Associates, LLC (FAI) can perform a complete analysis of a reactor auxiliary building using a unique FAI developed software product (FATETM).  FATETM is able to analyze the reactor auxiliary building accident response, including hydrogen distribution and contamination transport, room heatup due to loss of HVAC, and fire and smoke migration.  This versatile tool addresses multiple issues that arise during extended SBO events, and can be generally applied in any facility where flammability, combustibility and contamination hazards must be modeled, including non-nuclear power plant facilities such as chemical, refinery and pharmaceutical facilities.

Results can be used to design and optimize monitoring and control systems or to aid development of Severe Accident Management Guidelines (SAMG).

Since it is not a CFD code, FATETM can be used to model the entire reactor auxiliary building without being computationally expensive.  Because it uses a two-layer model to track gas stratification in individual nodes, FATETM has technical advantages over other lumped parameter codes.  This allows the code to predict hydrogen stratification in the containment and reactor auxiliary building.

FATETM can be used to model all the reactor auxiliary building rooms outside containment in order to:

Key results of the analysis include the time history of room and corridor habitability and the potential for flammability and its consequences.  FATETM is uniquely suited to nuclear facilities because in order to track smoke and contamination, it combines models for temperatures, pressures, flow rates and structural response with models for aerosol release, transport and deposition.

FAI has extensive experience delivering this type of analysis for a variety of nuclear facilities where applications include equipment response, habitability analysis and source term consequences.  FAI is a Westinghouse affiliate company and is globally working with Westinghouse to provide complete solutions for hydrogen monitoring and control in reactor or auxiliary buildings as well as containment and spent fuel buildings.