A station (SBO) is defined as the all AC power at a nuclear plant, This is a loss of off-site together with a failure of the emergency backup to operate. Per NRC Regulations Title 1 0, Code Of Federal Regulations (CFR) 5063 Of all alternating current all US. plants a coping capability for SW conditions for a limited time period rarging from approximately tv.•o to sixteen hours. An extended of AC power event is as a loss of all off-site and on-site AC sources for an indetemnate period Of time. which will Challenge the kM1g-term Cooling Of the the Spent fuel (SFP) unless mitigating actions are taken. I his extended requirement is the result of the events at Fukushima.

Station batteries provide control to switchgear breakers needed for the operation of the AC equipment including the independent core cooling sources. The batteries also provide necessary control power for indication of vital plant parameters. DC power in some designs is the motive power for DC independent injection. Outside of the required independent offsite power supplies there are dedicated SBO diesel generators or gas turbines. Prior to recovery from an ELAP it is imperative that DC power remain available for indication and for control once AC power is restored.

An example of a station DC battery system that will be used for this analysis is shown in Figure 1. This figure shows the 125V DC bus, battery and battery charger. The loads were distributed between two feeder panels. 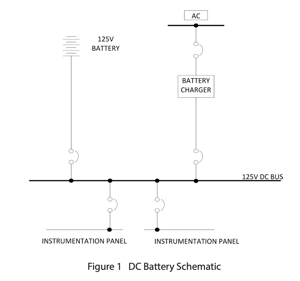 The battery in this example was sized for a four hour profile. Typically, it is assumed that the diesel generator would be available in this time frame. In the four hour timeframe, the bus voltage reaches 118.9 V. With a cell voltage of 1.97 volts per cell (VPC), this shows there is margin when assuming 1.75 VPC as the minimum cell voltage. Figure 2 shows a plot of Time (min) versus Discharge Voltage (V).

The same battery was then analyzed for an ELAP duration of eight hours with load shedding. It was assumed that load shedding was not implemented until one hour into the event. Figure 3 shows the bus voltage at eight hours is 114.12V which equates to 1.90 VPC indicating margin is still available. 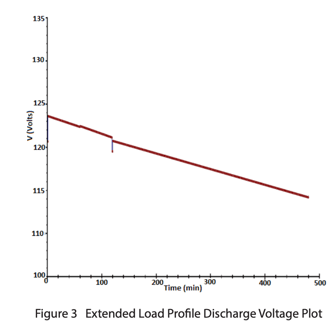 Also in Figure 3, at 60 minutes the plot shows a slight dip indicating change in the load profile. A second dip on the plot at 120 minutes (for duration of one minute) indicates an attempted start of the diesel generators.

A third run was then made to determine the time to the minimum bus voltage of 105 V (1.75 VPC); this was reached in 11 hours. To extend beyond 11 hours, the system was operated with one division battery tripped at the time of load shedding and then reconnected when the operating voltage of the functioning 125 VDC system reached 105 VDC. This then allowed DC power to be available for close to 24 hours. Given this is an ELAP and accident only one division of the DC is reserved. This type of operation can be completed by operating the redundant equipment on the delayed system or by a manual crosstie between divisions to allow for continued operation of the same equipment.

In some cases analyzed, the bus voltage was allowed to drop below 105 VDC. This was based on the dropout voltage being lower then pickup voltage. Also, this extension beyond the minimum volts per cell was substantiated by calculating the actual mole fraction of acid remaining in the battery.

Another assumption was that all load shedding occurs at a given time. In reality, once the decision is reached to shed load the process usually extends over a period of time with gradual load decay as opposed to a single shedding of load. For example, the process may start at 0.5 hours and be completed at 1.5 hours. The example above assumed full battery load up until the time of load shed.

These analyses are important in the sense that they help identify the time where recovery of AC becomes critical.