Water is a precious natural resource and a valuable commodity that is fundamental to life all over the world. But according to the American Society of Civil Engineers, our own water piping distribution networks in the US are graded “D-minus” meaning they are a near “Fail”.

Many of the more than one million miles of water main pipes in the US were installed in the early to mid-20th century with an expected lifespan of 75 to 100 years––and they are breaking at a current average rate of 240,000 annually.* If we do nothing, this number will likely rise as the aging pipes continue to deteriorate due to conditions such as:

Even when pipes show no sign of deterioration, they will break when they are unable to withstand the rapid loading transients (water hammer events) caused by rapid starting and stopping of water flow to satisfy the needs of water users.

The American Water Works Association (AWWA) estimates it will cost $1 trillion to maintain and expand service of US water mains to meet the projected water demands over the next 25 years. With the arrival of COVID-19 and a growing gap in funding, municipalities may be tempted to focus on priorities other than keeping up with the operation and maintenance of those essential pipes that transport clean water to homes, industries, hospitals, etc.

Main line breaks are especially costly and time-consuming for municipalities and dangerous for their work force. Flooding, road closings, water outages and boil-orders can also put residents and businesses at risk. For the sake of both public health and economic growth, utilities need to explore, when possible, less disruptive and less costly alternatives to total replacement of water mains.

Understanding water hammer could lead to a solution

Nuclear power plants (and many other industrial processes) use water in a variety of ways, basically to create steam heat that generates electricity and again to condense the steam once it has delivered energy to the turbine.** Thermal-hydraulic testing conducted by Fauske & Associates, LLC (FAI) in support of nuclear safety analyses has illustrated the potentially destructive effects of a hydraulics-based phenomenon called water hammer on supply pipes. We’ve also seen how suppressing the surge that leads to water hammer helps protect those same pipes from reaching their breaking point.

Could surge suppression then be a solution that, applied to the water industry, greatly prolongs the life of its infrastructure, saving perhaps millions of dollars and avoiding unnecessary water loss?

First, let’s look at what causes water hammer. A water distribution system typically consists of miles of pipes that are obstructed by the bends and T’s that are needed to supply water to the customers. Water systems also have valves and hydrants, with many of the valves being operated by high-volume users such as manufacturers, car washes or fire suppression systems.

When water is flowing at high velocity and a valve is activated quickly, or the water encounters a bend or a T, it is forced to slow down and is then followed by a surge forward with even greater momentum. These uneven pressure changes within the water utility system create a cavitation which leads to water hammer. The water, under immense pressure, seeks the weakest point in the system to find release. That’s when a main break is likely to occur.

Compare this with what happens in another type of liquid transport system. The petroleum industry distribution piping uses 10 times greater pressure (between 800 and 1200 psi) than the water industry and yet experiences very few main breaks. That’s because instead of using the T’s and 90° angles in pipes to serve multiple homes and industries, petroleum industry systems can be designed with more gradual transitions and they have far greater control of their valves.

It’s a common belief that cold temperatures cause mains to break. While we’ve proven that cold temperature (38o F or below) can make cast iron pipes brittle and cause breakage, cold weather isn’t the only factor. Houston averages only 18 days with temperatures of 32o F or less and yet it experiences more main breaks per mile than any other US city.

These examples––the petroleum industry with few main breaks and a warm climate city with many breaks––provide evidence that it’s primarily water hammer/cavitation that is causing much of the damage to our water infrastructure.

Engineers from FAI began exploring the role of surge suppression in preventing water hammer in the nuclear industry in the 1990’s. But before that, a public works superintendent for the rapidly growing Village of Burr Ridge, Illinois, had been noticing early in his career how, with increasing demand for water, more main breaks occurred. After witnessing the repeated risk of water contamination and endangerment of workers’ lives, Howard Heil, a farmer’s son who grew up solving problems and making his own repairs, observed a pattern. He was especially intrigued by where main breaks did not occur-–near elevated tanks and pumping stations. He also thought about what he knew about residential plumbing. A banging noise means the water system is missing an air-filled volume that absorbs the sudden change in pressure caused by turning water on or off quickly, as often happens in a kitchen, bathroom or laundry room.

In 1994, Heil began to introduce the same principle of surge suppression that he had noticed with water tanks and in residential plumbing to the Burr Ridge water system. While at a main break site, he observed how the pipe broke. If it was circumference break, which looked like a pencil breaking, or a blow-out break, which is when the pipe split open, he and his crew planted a stainless steel air encapsulation tank as part of the repair work. (He learned that corrosion breaks, evidenced by a rusty hole, can’t be as easily prevented with surge suppression but could be postponed by it.) The result of his “Johnny-Appleseed” style work was that Burr Ridge experienced dramatically fewer breaks and less water loss, prolonging the life of their water distribution system and delaying unpopular special tax assessments on residents and businesses.

Science based backing of Heil's theories

In the early 1990’s, Heil came to FAI’s office which is located in Burr Ridge next to a water plant he supervised. While the purpose of his visit was to service a water meter, he began a conversation with employees about how he had installed a surge suppression device at the water plant next door. He shared his findings about how the device would mitigate the water hammer that, in this case, was increased by activation and deactivation of the water supply due to a recently added well.

Engineers from FAI became intrigued with Heil’s work and he immediately recognized that FAI’s technical knowledge and water hammer demonstration lab were complementary to his own practical experience. FAI’s team worked with Heil and a manufacturer to develop an early model of the product, an informational brochure and even a tabletop display to demonstrate the science behind surge suppression. FAI also joined Heil at some of his early continuing education seminars to help “teach the teacher” in educating the water industry about the power of surge suppression to protect their mains.

In 1995, one of Fauske & Associate’s founders, Dr. Robert E. Henry, a mechanical engineer and widely recognized expert in two-phase flow, concluded that surge suppression could greatly extend the life of water distribution systems and reduce maintenance costs. You can read his white paper report here.

Heil had some success convincing other municipalities in and outside the Chicago area to try the surge suppression that worked so well for the village of Burr Ridge. He would follow up with them later to add data to his findings and develop ways to continuously improve his product. Early adopters include DuPage County Water, Oak Park and Hickory Hills, all in Illinois; plus, Ann Arbor, Michigan, and Green Bay, Wisconsin, and a handful of others throughout the country who have been using surge suppression for 20 years or more. Heil’s follow up conversations confirm that these systems are experiencing fewer main breaks than before they installed the surge suppression devices.

Opening up to "out-of-the-box" thinking

Heil did not have the resources to keep detailed records and quantify the results. But he insists that if municipalities did so, they’d learn (like he did) where to place surge suppressors to calm water hammer and avoid the damage it causes to any vulnerable water distribution systems.

Technology to measure exactly when and where peaks and high pressures occur in liquid transport has long existed. Today this information can easily be viewed and tracked via computers. Why couldn’t this data be used to more quickly and efficiently determine problem areas and proactively prevent a potential disaster?  This may even be an opportunity to apply available machine learning technology from FAI parent Westinghouse LLC 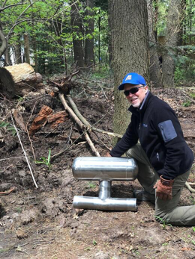 It is unclear why surge suppression is not being used more broadly to protect our nation’s essential but near-failing water distribution systems. Heil continues to advocate for his patented water solution and educate himself further, including attending one of FAI’s water hammer training courses, where he was the only attendee from a water utility organization. For him surge suppression is a common sense, no-brainer solution to a growing, worrisome problem. He believes that, unfortunately, the water industry is slow to change and too many decision-makers are stuck in the status quo.

But the need for life-sustaining water isn’t going away. Essential infrastructure will continue to deteriorate as we struggle to regain economic stability and find the funding needed to operate and maintain water supply systems. One way to move forward is to learn from testing and scaling innovations such as surge suppression that would cost much less than entirely replacing mains and could save millions of dollars. In Heil’s own words, “Prove to me it doesn’t work.”