Material safety data sheets (MSDS) are a key pillar of occupational safety and health in the United States and around the globe. It is an OSHA requirement that employers make MSDS available to employees that handle or could handle these chemicals in the work place. Sometimes, the information provided in a material safety data sheet is accurate, complete and well-researched. However, this is not always the case, as has been found through testing at Fauske & Associates, LLC (FAI). Data shown in Table 1 shows examples of the occasional discrepancy between the experimentally determined flash points and the MSDS reported flash point. 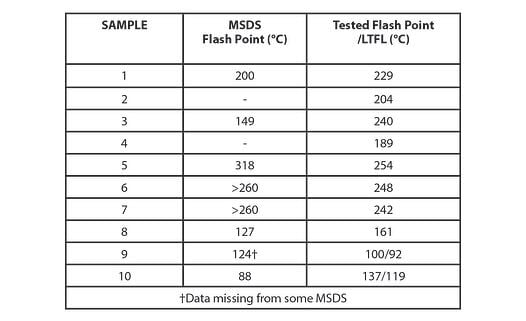 These test results are a good example of inaccurate data that could be found in an MSDS. While the safety issues of operating with a flammable liquid are obvious, a flash point value that is overly conservative could be very costly as well. Overly conservative flash point values could result in unnecessary process controls or lower temperatures of operation, which could increase costs and lower production yields.

What can cause MSDS inaccuracies for a flash point?
There are many reasons that the flash point listed on a particular MSDS could be inaccurate, such taking a worst-case scenario value, using the flash point of a comparable chemical, taking the data from other MSDS sheets, or inaccurate test methods. However, there is also a possible discrepancy between a flash point and a reported flash point that is dependent on the testing standard used. Several tests are commonly utilized to measure a flash point, through a few different ASTM standards. These tests are listed in Table 2.

All of these test methods provide a temperature at which a liquid becomes flammable. The classic flash point testers are the TAG, Cleveland Open Cup, Pensky-Martens and Small Scale tester. The Lower Temperature Limit of Flammability (LTFL) measures the temperature at which a liquid becomes flammable in a 5 L glass flask. The LTFL is typically more conservative than the reported flash point. Further information on LTFL temperatures versus flash point temperatures can be found in the article “Evaluating the Flammability Hazard of Liquid Vapors" in our Winter 2012 Process Safety Newsletter.

What are the differences in flash point testing standards?
Each flash point test standard listed in Table 2 requires a different apparatus and a different test method. The Cleveland Open Cup test is fundamentally different from the other 3 flash point tests in that the sample cup is heated while open to the atmosphere. This results in a flash point that is typically higher than closed cup tests, where the vapors are contained within the sample cup prior to the test flame being applied to the sample. The Cleveland Open Cup, TAG and Pensky-Martens testers utilize ramp methods, where the temperature of the sample is increased gradually over time and the vapors are tested periodically (every 1 to 2°C). The Small Scale Tester provides a go/no-go result at a single temperature, but requires only 2 to 4 ml per test. The TAG closed cup tester is heated by a recirculating fluid, typically water or a 1:1 mixture of ethylene glycol and water. The TAG closed cup test method has a lower repeatability and reproducibility, but the tester is not recommended to be used to measure materials with a flash point greater than 93°C.

Fauske & Associates, LLC (FAI) offers flash point testing conforming to numerous different standard test methods, including all those listed in this article. If your MSDS is lacking flash point test data or the data comes from an unknown source, performing flash point testing is a quick and easy way to ensure safety in the work place. Contact Tom Johnson at tjohnson@fauske.com or (630) 887-5209 for more information.