A first order evaluation of vessel two-phase flow regimes and their effect on pressure relief sizing can be reduced down to determining if the system in question exhibits foamy behavior. This is the case for both non-reactive as well as reactive systems and needs to be evaluated under conditions coinciding with the relief venting process and pressure.

In contrast to the often debated depressurization technique, a simple method to determine the prevailing regime characteristic at both low (near atmospheric) and higher pressure relief conditions is the ARSST flow regime detector illustrated in Figure 1 (Fauske, 2000). 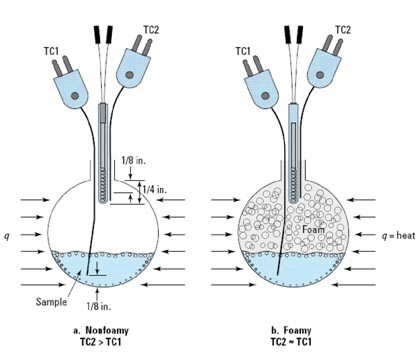 The importance of flow regime characterization and pressure relief sizing is illustrated in Figure 3 in case of fire exposure and is relevant to storage vessels including both non-reactive and reactive conditions (Fauske, 2006). 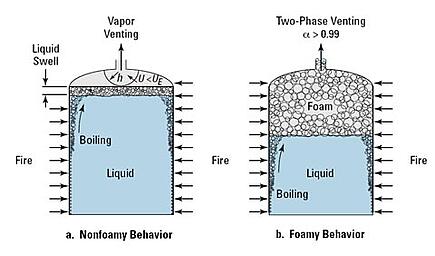 A further illustration of the importance of flow regime characterization and pressure relief sizing is illustrated in Figure 4 for process vessels and is relevant to reactive vapor systems (tempered reactions).

Figure 4a illustrates two-phase venting characterized by the churn turbulent flow regime in case of non-foamy behavior, while Figure 4b illustrates two-phase venting characterized by the bubbly flow regime in case of foamy behavior. In case of a nearly liquid-full process vessel, the vent area requirement for the foamy case is about twice that required for the non-foamy case, all other conditions remaining the same (Fauske, 2006). It also follows that the required liquid fill fraction to prevent two-phase flow can be much higher for the non-foamy case than the foamy case. 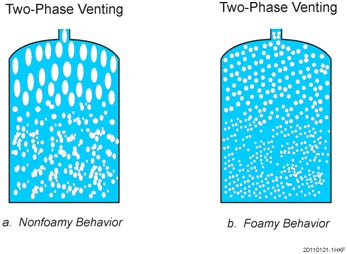