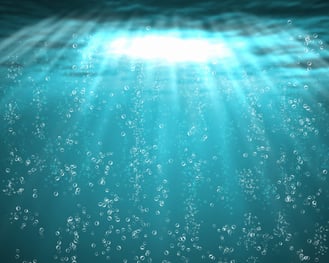 Flow regime characterization in emergency relief system (ERS) design is important because it can impact your required vent size and will impact the quantity and rate of liquid material that is vented.

The quantity and rate of liquid material that is vented will affect the design of downstream effluent handling equipment. The flow regime, in the context of emergency relief system design, refers to the interplay between vapor (and/or gas) and liquid phases in a vessel. The flow regime is a characteristic of the venting material during an emergency relief.

The Design Institute for Emergency Relief Systems (DIERS) program [1] contributed to the understanding of the behavior of the vapor liquid two-phase flow in vessels and supplied reasonably easy to use correlations that generally describe the two phase flow behavior. The resulting correlations are based upon a drift flux model [2-3] approach. The drift flux model treats the vapor and liquid phases as a single homogeneous mixture, but then describes the difference in velocity and the non uniform distribution of the two phases using constitutive correlations. The drift velocity, which models the velocity difference between the vapor and liquid, is defined as

The churn-turbulent flow regime is characterized by larger bubbles that can be elongated and the flow structure is very turbulent partially due to bubble induced turbulence. These bubbles have a smaller surface area to volume ratio. Figure 2 shows an image of churn-turbulent flow in a vertical airwater test section. This image was obtained in a 2” diameter cylindrical test section, which is much smaller than most vessels and the wall can impact the flow structure. These wall effects are not as pronounced in

large scale vessels. The smaller surface area to volume ratio compared to the bubbly flow regime indicates that the vapor and liquid phases are not tightly coupled, resulting in more disengagement between the vapor and liquid phases for this flow regime.  Figure 1 Image of Bubbly Flow in a Vertical Air-Water Test Section  - Courtesy of Dr. B. Doup and Dr. X. Sun (The Ohio State University) 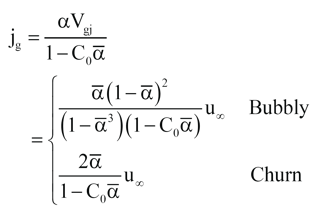 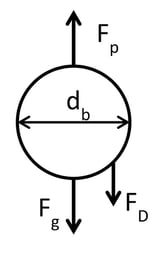 The form of the bubble rise velocity is obtained by performing a force balance on a single bubble in an infinite medium (i.e., pressure force = body force + drag force). Figure 3 shows this force balance schematically.

The pressure force is defined in Equation 5

The body force is defined in Equation 6

The drag force is defined in equation 7

The drag coefficient can be expressed as shown in Equation 8

The resulting bubble rise velocity is then

Researchers have replaced the √2 factor by experimentally determined coefficients. Peebles and Garber [5] (according to Wallis [3]) present the bubble rise velocity as

which was used in the DIERS program for the bubble rise velocity in the bubbly flow regime.

which was used in the DIERS program for the bubble rise velocity in the churn-turbulent flow regime.

The next logical question is how to determine flow regime for a new material or new mixture of materials? The only option at this point is to test your material under emergency relief conditions.