Flow regime determination in emergency relief system (ERS) design is an important aspect of process hazard analysis because it can impact your required vent size and will impact the quantity and rate of liquid material that is vented. In the summer edition of Fauske & Associates, LLC's Process Safety Newsletter, we discussed the characteristics and showed the modeling of the churn-turbulent (or churn) and bubbly flow regimes in the article "Flow Regime Characterization in Emergency Relief System Design".

In the current issue, we provide practical guidance on how to determine the expected flow regime under emergency relief venting conditions.

The flow regime during venting can be determined by running a blowdown test in the Vent Sizing Package 2 (VSP2TM). The VSP2 blowdown test procedures, test interpretation, potential missteps, and benchmark test results that are applicable for vapor systems will be discussed.

The suggested approach is to simulate the upset scenario in the VSP2 and then depressurize the test cell using a vent located on the lid of the test cell. Figure 1 shows a schematic of the VSP2 setup in blowdown configuration. This configuration is applicable for many materials and tests. However, depending on the specific design of the blowdown test the following modifications may be investigated:

• If your material is not hazardous you may be able to route the vent line to an open vessel filled with room temperature water. The water will act as a quenching fluid for the hot effluent from the test cell.

• If the material being tested has a high vapor pressure at room temperature, valves may need to be installed on the fill line and vent line inside the containment vessel to prevent mass loss after the blowdown is complete.

The general blowdown test procedures are:

The bubble rise velocities are

g = acceleration due to gravity, m/s2

where     Avent = effective flow area of the vent on the VSP2 test cell, in2

Ax = cross sectional area of the VSP2 test cell, in2

The interpretation of the VSP2 blowdown test is as important (if not more important) than the design and execution of the blowdown test and is necessary for determining the flow regime of your material. The main indicator is mass remaining in the test cell after the blowdown. The final mass is used to obtain an average void fraction. The final void fraction is then compared with the disengagement void fraction for the bubbly and churn flow regimes to obtain similarities. The disengagement void fractions for the bubbly and churn flow regimes are determined using Equation 4 [1].

The results of the blowdown testing may not always be extremely clear. When disengagement occurs while the flow is sub-critical, the vapor superficial velocity can be much lower than the vapor superficial velocity used in the test design.
This will affect the expected vessel average void fraction for complete disengagement. In this case simulating the VSP2 blowdown test may be necessary in order to provide the temperature and pressure comparison and aid in helping predict the superficial velocity when disengagement occurs. Crushing the test cell indicates that the size or number of valves used to depressurize the containment may be too small. In this case, the test may need to be repeated using a larger number or size of valves to depressurize the containment vessel. Alternatively a heavier walled test cell could also be used.

Benchmark tests have been performed using tap water and soapy water. Table 1 shows the initial conditions and the results of the benchmark tests. Figure 2 plots Equation 4 and the final void fractions of the benchmark test. Dynamic simulations were performed to aid in the interpretation of the blowdown tests. These tests show that tap water is predicted to behave as churn flow with a distribution coefficient of 1.5 and soapy water is expected to behave as a foamy or bubbly flow with a distribution coefficient equal to 1.01, which is consistent with the large scale test results [1]. 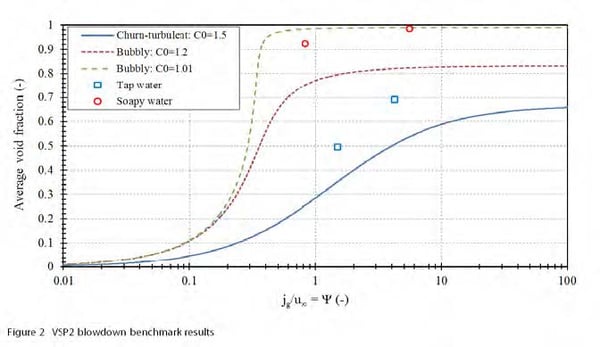 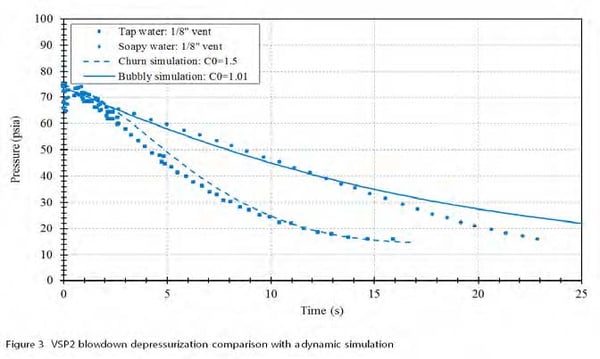