The main purpose of hazardous area classification layout is to facilitate the selection of appropriate equipment and installation procedures to ensure that the equipment can operate safely in that environment and does not cause fires or explosions.

Hazardous areas can be defined as locations in an industrial facility in which an explosive atmosphere can be caused due to the presence of flammable gases, liquids, vapors, dusts, and fibers, under both normal and abnormal operating conditions.

Hazardous area classification is a method of analyzing and classifying the environment based on the type of flammable material present, and the probability of its occurrence.

The hazardous area classification layouts are typically prepared by a team of Process and Electrical engineers, supported by specialists from plant operations and Health, Safety and Environment (HSE).

In the United States, API RP 500, NEC, NFPA 497, are NFPA 499 are most commonly used. The American system is based on Class and Division system of hazardous area classification.

American Standard API RP 505 is also based on the Zone system.

This article does not address hazardous areas caused by flammable fibers.

Origins of hazardous area classification can be traced back to coal mining during the industrial revolution. Methane (firedamp) that was trapped in the coal was released during the process of mining. Methane, being a flammable gas, presented a major fire hazard as it was easily ignited by the flaming torches carried by the miners, and this sometimes led to the ignition of coal dust causing major accidents.

As a safety precaution a person wrapped in a wet blanket and carrying a long pole with a flaming ember at the far end entered the mine before the start of a shift. The intent was to ignite a cloud of methane if it was present, and the "safety officer" would (hopefully) be saved by the wet blanket. However, being saved by the wet blanket depended on the volume of methane. The rationale was that this approach would save many other lives.

Safety improved with inventions such as the safety lamp invented by Humphry Davy around 1815. This was followed by much safer devices such as battery-operated lamps.

In the United States, the concept of hazardous areas was first addressed in the 1923 Edition of the National Electric Code (NEC). In current editions, Chapter 5 (Special Occupancies) addresses hazardous areas.

Fire can be defined as a rapid oxidation process (a chemical reaction) which releases heat, light and sound.

The definitions of each of the three components are as noted below:

Fuel- something that will burn under the right conditions

Heat- source of ignition that will cause the fuel to ignite

Oxygen- required to sustain the fire 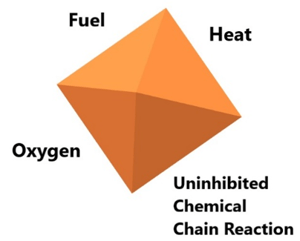 Class and Zone Systems are summarized in the following table:

1. There is no direct correlation between Class and Zone systems. The table presents an approximate comparison for the purpose of illustrating the similarities / differences between the two systems. Please refer to applicable standards for definitions and details.

Temperature Class is as defined in the table below:

Gases and vapors have distinct physical and chemical properties such as smell, color, ignition temperature, explosion pressures etc. Given the number of gases and vapors encountered in industry it is not practical to identify gases individually for the purposes of hazardous area classification. Hence, as a practical method, gases are placed into groups. This method is followed in both American and European systems.

Equipment such as circuit breakers, switches, contactors etc., which can cause arcing and sparking shall be enclosed in explosion proof housings. Refer to Article 100 of the NEC for definitions of explosion proof equipment.

For Class II locations, the enclosure shall keep dust out of the interior and operate at a safe surface temperature. The presence of dust inside the enclosure is unlikely and hence the probability of an internal explosion is low. These enclosures may have thinner walls in comparison with enclosures rated for Class I installation. The construction of these enclosures is known as dust-ignition proof. Refer to Article 100 of the NEC for definitions of Dust-Ignition proof equipment.

In case of purged systems, the enclosure is supplied with a protective gas such as dry instrument air or nitrogen at a suitable pressure and flow rate and this will reduce the concentration of any flammable gas or vapor that may be initially present to a level that it will not support an explosion. The enclosure is purged before starting the equipment.

In case of pressurized systems the enclosure is supplied with a protective gas such as dry instrument air or nitrogen to maintain a pressure slightly higher than atmospheric pressure, and this will prevent the entrance of a flammable gas or vapor or a combustible dust inside the enclosure.

NFPA 496 provides information on the methods for purging and pressurizing electrical equipment. Refer to Article 100 of the NEC for definitions of purged and pressurized systems.

ANSI/UL 913 provides information on the design, testing and evaluation of intrinsically safe systems. Installation requirements are covered in Article 504 of the NEC.

The IEC system follows the system as defined in various parts of IEC 60079. The most commonly used ones are as noted below:

Some best practices for hazardous area classification are as noted below:

Electrical equipment such as motors, circuit breakers, solenoids etc., can cause arcs and sparks under normal and abnormal conditions. This could cause a fire and/or an explosion in an environment where flammable chemicals are present, such as in an oil refinery or chemical manufacturing plant. Hazardous area classification helps us identify these risks so we can select appropriately rated equipment to ensure a safe and reliable operating facility.