Historically, there has been a public concern about what might happen if an ground motion of significant magnitude would occur adjacent to a nuclear power plant or a process facility that handles hazardous materials.  The consequences of such an event were extensively illustrated by the media coverage following the Tohoku quake in Japan on March 11, 2011.  The seismic event that measured 9.0 on the moment magnitude scale resulted in a large tsunami that penetrated several miles inland.  The disaster caused the failure of vital infrastructure at the Fukushima Daiichi nuclear power plant which eventually caused the melt down of three reactors.  Likewise, it caused fires, the release of hazardous materials, and damaged over 100,000 buildings in the areas where it struck.  The power and water transmission infrastructure was also heavily damaged, which resulted in blackouts and water shortage immediately after the temblor and during the following days.

It appears that the public is mostly concerned with nuclear disasters, which is quite ironic, because nuclear facilities are probably the best prepared to withstand a seismic event. Most nuclear facilities (even older ones) have been engineered to stringent standards and specifications that assure structural integrity and the functionality of essential equipment for seismic levels beyond the expected worst credible case.  In fact, the safety systems at Fukushima Daiichi started and worked as intended.  The large tidal wave of approximately 33 feet caused by the tsunami led to the failure of infrastructure that was above and below ground - and this eventually caused the safety systems to stop.  Unfortunately, a tsunami of this magnitude was not accounted for in the design basis of the plant.  However, the ground acceleration caused by the quake was covered in the design basis for some units and not greatly exceeded for others, which is the reason why the safety systems worked initially. In contrast, this disaster caused extensive damage to many industrial facilities on the Japanese coast including “petro- and agrochemical plants, iron foundries, steel works, automotive, electronics, food processing, paper, plastics and pharmaceutical plants.”[i]

Many of the existing chemical, pharmaceutical and other industrial facilities in the world were built years ago, and without consideration for potential seismic risks. Even modern facilities sometimes gloss over this subject.  This is quite interesting considering that for some chemical processes the worst upset scenario is loss of cooling, which can be caused by loss of power.  An upset scenario at a process facility can have two significant consequences 1) the release of hazardous materials that have an impact on public health, and 2) the loss of expensive product and plant outage.  One paper by Sera and Fumanti (2012)[ii] explores how strong seismic activity in populated areas have impacted high risk industrial plants in Japan, India, and Turkey. This is not to say that the risks aren’t important. In fact, an article in Pharmaceutical Manufacturing points out that understanding risks (such as being in a quake zone and characterizing the stability of a material) are essential steps to managing risks.[iii]

After the Fukushima event, the Nuclear Regulatory Commission (NRC) conducted a study regarding the "potential earthquake vulnerability of US plants".[iv] The United States Geological Survey (USGS) Earthquake Hazard Map below illustrates "risky" areas.  From the map, we can infer that most of the California coast, and several key areas, like St. Louis, Portland, Seattle, Vancouver, the greater New Jersey area, and others, have the potential to experience relatively strong seismic activity. This inference is corroborated by an article in Wired,[v] which points out that many of these hazard zones haven’t seen a significant event in 100’s of years, which makes the possibility of a larger event more likely. The NRC highlights that there are seismic risks in many "central and eastern states (CEUS) that have implications for plant design".[vi] While these catastrophic events may not be likely, the existence of the faults is enough to initiate potentially dangerous events. 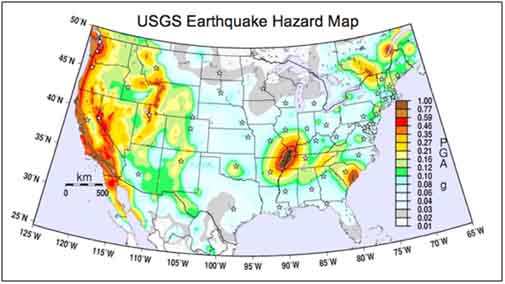 So what are plants required to do to address these hazards?

Sundararajan’s (2005) “Probabilistic Structural Mechanics Handbook” references how certain states like California have specific programs to mitigate the public’s exposure to "undue risks".[vii] Others, like Paolacci, Giannini, and De Angelis (2013) suggest the use of passive control techniques to mitigate chemical plants.[viii] Suffice it to say, there are many perspectives available. For many facilities, the attempts to mitigate risks started with preparedness programs, such as those suggested by OSHA.[ix] As with most risk mitigation approaches, the challenge is finding sufficient time and resources to address.

Fauske & Associates, LLC has a unique approach to seismic plant analysis because we combine our ability to characterize and understand chemicals and processes by using laboratory testing, with walk down techniques and structural assessments from our work in the power industry. The result is a meaningful approach that addresses the immediate hazards associated with a reactive process, the adequacy of the structural design, as well as a realistic understanding of the risks at the plant level. We can perform a Seismic Safety Assessment of a facility to determine the risks with existing structures and citing concerns. We can then look at the raw materials and mitigation controls like relief vents, quench tanks, etc. to ensure that they are adequately engineered to prevent any issues.

Jens Conzen is the Director of Plant Services at Fauske & Associates, LLC. He holds a Masters in Engineering Mechanics and has performed numerous seismic assessments at nuclear facilities. Jeff Griffin is the Director of Sales & Business Development. For more information, please contact Jeff at griffin@fauske.com and 630-887-5278. www.fauske.com