Among the capabilities at Fauske & Associates, LLC (FAI) is the development and use of computational models to aid in the analysis of plant transients and severe accidents of nuclear power plants. In this technical bulletin, the new capability of the Modular Accident Analysis Program (MAAP) to model cladding and fuel materials other than Zirconium (Zr) and Uranium Dioxide (UO2) during a severe accident is described. MAAP is software owned and licensed by EPRI (Electric Power Research Institute) that predicts thermal hydraulic and fission product responses during severe accidents involving core melt. MAAP can determine the time to uncover the core, time to reactor clad failure, time to core melting and the extent of core degradation, time of vessel failure, and eventual source term release to the environment.

In the case of Fukushima Daiichi, a station blackout accident (SBO) occurred in which all on-site and off-site power was lost for an extended period of time. Due to the loss of all power for an extended period of time, core fuel assemblies were uncovered and overheated by decay heat which caused the fuel rod cladding and channel box Zr to react with steam. At elevated temperatures Zircaloy reacts energetically with steam to produce Zirconium oxide and hydrogen. The reaction energy released during clad oxidation can far exceed the decay heat, thus increasing the rate of core heat-up and disassembly. In addition, the hydrogen generation increases the risk of combustion (deflagration and detonation) events in containment and in nearby structures. The reaction of zirconium and steam resulted in the eventual hydrogen explosions in Fukushima Daiichi.

In light of the Fukushima Daiichi severe accident, the nuclear industry and US Department of Energy are developing and evaluating the advantages of nuclear fuel with cladding other than Zircaloy to minimize or altogether avoid the reactions that occurred at Fukushima Daiichi. The purpose of these new cladding materials is to provide good high temperature material properties and to prevent or reduce hydrogen generation during severe accidents. In addition to the new cladding materials, new fuel material (other than UO2) is also being considered. The capability of modeling new cladding and fuel materials has been added in MAAP version 5.051, such that accident tolerant fuel (ATF) developers can evaluate responses of their new materials during a severe accident. In this technical bulletin, only the responses of SiC cladding material for a PWR are presented for SBO and SBO with AFW. However, the code features are generic enough to be used for a wide array of ATF materials for PWR and BWR.

To model ATF material properties and reaction phenomena, the user can specify the following properties: 1) Fuel, clad and clad oxide material properties, 2) Clad oxidation and volatilization reactions with H2O, 3) Fuel and fuel cladding failure criteria, and 4) Fission product release rate from fuel materials. For a given ATF material, the following properties are needed for the cladding, fuel, and cladding oxide material (produced because of reaction with steam/water): Density, specific heat, specific internal energy and thermal conductivity as a function of temperature; as well as melting temperature, latent heat of fusion, viscosity, surface tension, and molecular weight. A user can define an oxidation reaction equation and reaction rate, and a volatilization reaction equation and volatilization rate.

3. PWR SBO Results with SiC and Zr Cladding without any Mitigation

Core heat-up for Zircaloy and silicon carbide versions of the PWR station blackout scenario are compared in Figure 1. After core uncovery, at approximately 7,577 seconds, the temperature of the hottest node increases steadily until the highly exothermic zirconium oxidation causes a much more rapid increase for the Zircaloy cladding case when compared with the two SiC cases presented. This leads to significant core melting and disassembly such that when the accumulator injection is started following hot leg creep rupture, at 11,456 seconds, the coolant cannot reach the interior of the core due to the degraded core geometry. On the other hand, the silicon carbide oxidation reaction contributes significantly less heat compared to the Zircaloy oxidation reaction. The core temperature remains lower in the sequences with silicon carbide and the core retains its original geometry. This allows the core to be cooled rapidly when the accumulator injection is started following hot leg creep rupture at around 12,564 seconds. After all the coolant in the core has boiled off, the core heats up again and begins to melt. For ATF materials, material interactions and eutectic formations in the core are disabled. The run for the SiC cladding case is terminated when the core material relocates into the lower plenum. Also shown in Figure 1 is the hottest core node temperature for SiC cladding assuming no volatilization of the silicon oxide (SiO2). Without silicon oxide volatilization, larger oxide thicknesses and smaller cladding oxidation rates are predicted, resulting in a slower core heat up. In this example, the impact of volatilization is small because the user-input minimum oxide layer thickness of 1 micron suppresses volatilization most of the time. Once the oxide thickness reaches 1 micron, the oxide layer does not grow because the volatilization rate is larger than the oxidation rate. 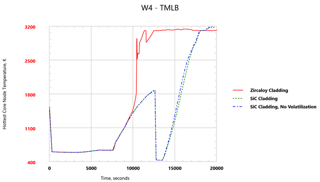 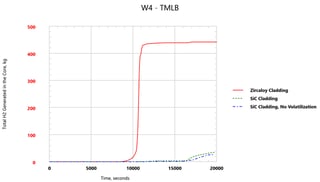 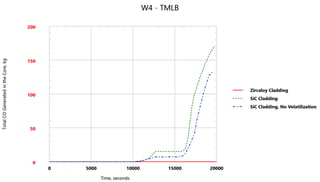 In this case, it is assumed that 1 hour of turbine driven auxiliary feedwater (TD-AFW) was available for all steam generators. Because there is more water in the steam generators due to the TD-AFW, the core uncovery was delayed to ~ 17,390 seconds. The hot leg creep rupture occurred at 22,232 seconds for Zr cladding and 23,456 seconds for SiC cladding. The temperature of the hottest node in the core is shown in Figure 4. As shown in the Figure, the time of the hottest core node temperature reaching 2500 K was delayed about ~ 6,400 seconds for the SiC cladding compared to that of the Zr cladding.

In this technical bulletin, the new capability of MAAP to model accident tolerant fuel materials has been introduced. The analysis presented here illustrates the impact of ATF materials on accident progression, total mass of hydrogen produced and timing of major events. The new models introduced in MAAP v5.05 can be used to analyze a wide array of materials that are being investigated for the fabrication of accident tolerant fuel.

1 MAAP v 5.05 is currently in beta testing and is expected to be released later in 2017