Modular Accident Analysis Program (MAAP) is an Electric Power Research Institute (EPRI) owned and licensed computer program that simulates the response of light water and heavy water moderated nuclear power plants for both current and Advanced Light Water Reactor (ALWR) designs during a severe accident. MAAP represents the integral behaviors of severe accident conditions that include overheating of core material, oxidation of the high temperature core materials in a steam environment, relocation of molten materials from the core region into the lower plenum, the subsequent failure of the Reactor Pressure Vessel (RPV) and accumulation of the core material in the containment, along with the molten core concrete interactions that would accompany this latter relocation.

Normally, the heat loss through the lower head is small and accounts for only about 10% of the total heat generated in the reactor vessel. However, after a significant fraction of core has relocated to the lower plenum during a severe accident, a more accurate heat transfer calculation in the lower head is needed. Explicitly modeling the CRD housing beneath the reactor vessel can address this need. Also, it is possible for melt in the debris bed in lower plenum to overflow into failed CRD housings. The melt will travel some distance beneath the reactor vessel before it freezes, plugging the annular gap in the tube. The decay heat in the corium plug has to be dissipated through the tube wall. If the tube wall becomes sufficiently hot, it can fail by creep rupture, leading to vessel failure.

Evaluating this phenomenon requires modeling the heat transfer between the lower head, CRD tubes, pedestal gas and the pedestal wall, including the corium penetration distance and decay heat in the corium plug.
Another motivation for explicitly modeling the CRD tubes below the reactor vessel is to determine the mass of CRD tubes melted due to corium jet after vessel failure. The amount of melted CRD tube affects the mass and composition of the debris bed in the containment floor after vessel failure.

The heat transfer area of the lower head facing the pedestal gas is reduced by the area occupied by the CRD tubes. The effective thermal coefficient on the lower head is kept the same.

After vessel failure, the CRD tube melting due to the exiting corium jet below the reactor vessel is considered. MAAP considers several failure mechanisms including failure of the In-Core Instrumentation (ICI) tubes or Traversing In-core Probes (TIPs), creep failure of the closure welds for the ICI penetrations or CRD tubes, and creep rupture of the reactor vessel lower head. Each of these failure conditions has initial failure location and size. Following the initial failure, the flow of molten corium through the failure opening would cause substantial ablation of the opening. According to the MAAP results, the radius of the failure quickly grows to 10 to 30 cm.

The molten corium discharged through the failure opening would attain sufficient velocities and have enough superheat to melt CRD tubes and support structure below the vessel that are in the path of the corium flow [Epstein et al. (1976), and Pilch and Tarbell (1985)]. The analysis of Chu et al. (1992) also shows that the surfaces that are affected by the molten corium jet heat up to the melting temperature within 15-30 seconds of initial contact and start melting. Therefore, the ex-vessel CRD tube melting model assumes complete melting of CRD tubes in the direct path of the molten corium jet.

The BWR-MARK I simulation results with and without the ex-vessel CRD tube heat transfer model are examined to evaluate the impact of the model. As shown in Table 1, the ex-vessel CRD tube heat transfer model is invoked when the control flag IEQ1HT is set to one or two. The decay heat of the corium plug in CRD tubes is considered when IEQ1HT is set to two.

When IEQ1HT = 0, convection heat transfer between the ex-vessel CRD tubes and the pedestal gas is considered. Axial conduction along a CRD tube is suppressed after the CRD tube collapses inside the vessel.

Figure 5 through Figure 7 show the CRD tube wall temperatures in channel 6 (outermost channel). Note that axial node 16 is in contact with the lower head (green curve). Therefore, axial node 17 is the lowest CRD axial node inside the vessel (red curve). Its temperature is set to the steel melting point, 1,700 K, when the CRD tubes inside the vessel collapsed. Note that only a couple of nodes below the vessel, nodes 16 and 15, were affected by the lower head temperature; nodes 14 and below followed the pedestal gas temperature. The results for IEQ1HT = 1 (Figure 6) and IEQ1HT = 2 (Figure 7) are identical because corium ingress into the CRD annular gap did not occur in this simulation.

A sensitivity run was performed to delay vessel failure so that corium melt overflow into CRD tubes can be observed. When the local corium became molten at around 56,000 seconds, about 335 kg of corium flowed into the channel 6 CRD tubes. The molten corium penetrated the CRD tube about 0.4 m before it froze, plugging the CRD. The decay heat of the plugged corium was added to the CRD tube wall. The decay heat of the corium in the lower plenum was reduced by the same amount. Vessel failure due to the ex-vessel corium plug in CRD tubes was not predicted. Thermal radiation to adjacent CRD tubes and to the pedestal wall, and axial conduction in the tube wall were sufficient to remove the decay heat.

A sensitivity run was performed to delay vessel failure so that melting of ex-vessel CRD tubes due to the corium jet after vessel failure can be observed.

The vessel failed at around 57,000 seconds due to the instrument tube penetration failure at the lower head axial node 7, which is in contact with the CRD tube radial channel 6, axial node 17. The failure opening radius grew quickly to 0.294 m due to ablation. At around 60,000 seconds, 695 kg of ex-vessel CRD tubes has melted, consisted of 125 kg chromium, 514 kg iron and 56 kg nickel. The total masses of metal in the debris on the pedestal floor were 153 kg chromium, 4,850 kg iron and 74 kg nickel.

The CRD tubes below the reactor vessel were explicitly modeled in MAAP in order to improve prediction of vessel failure and debris composition on the containment floor. The BWR-MARK I simulation results show that explicitly modeling the ex-vessel CRD tubes had minor impact on the vessel failure time. A penetration distance of 0.4 m was predicted when the corium melt overflowed into the collapsed CRD tubes. Nevertheless, the corium plug did not cause creep rupture of the CRD tube wall, which could lead to vessel failure. Upon vessel failure less than 1,000 kg of CRD has melted due to the corium jet, contributing to about 14% of the steel mass in the debris bed on the containment floor. 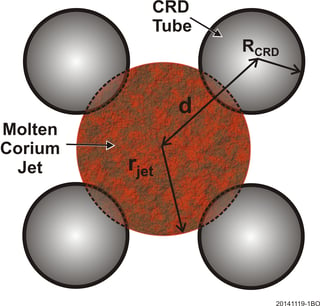 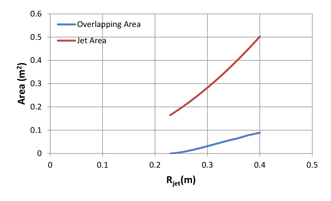