Chernobyl’s 30th anniversary was April 26, 2016. It has been called the world’s worst nuclear accident. According to the World Nuclear Association:

“The April 1986 disaster at the Chernobyl nuclear power plant in Ukraine was the product of a flawed Soviet reactor design coupled with serious mistakes made by the plant operators. It was a direct consequence of Cold War isolation and the resulting lack of any safety culture. 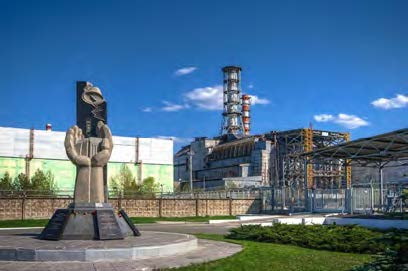 Acute Radiation Syndrome (ARS) was originally diagnosed in 237 people on-site and involved with the cleanup and it was later confirmed in 134 cases. Of these, 28 people died as a result of ARS within a few weeks of the accident. Nineteen more subsequently died between 1987 and 2004 but their deaths cannot necessarily be attributed to radiation exposure. The Chernobyl disaster was a unique event and the only accident in the history of commercial nuclear power where radiation-related fatalities occurred.”

Robert E. Henry, PhD, Emeritus Senior Vice President and Regent Consultant at Fauske & Associates, LLC was one of the U.S. Delegates selected to attend the international meeting at the International Atomic Energy Agency (IAEA) headquarters in Vienna, Austria. Since the IAEA is part of the United Nations (UN), this was the location selected for the USSR experts to explain what caused the accident, as well as what actions were taken during the aftermath. This three day presentation was entitled “Accident at The Chernobyl Nuclear Power Plant and Its Consequences” and the briefing revealed the design and operational flaws responsible for the accident. As with all accidents, it is essential to learn from the accident conditions and the long term stabilization of the core material even when the designs are greatly different from those in the U.S.

“The design for the RBMK (reaktor bolshoy moshchnosty kanalny, high-power channel reactor) nuclear power plants that were built in the Soviet Union differed considerably from the commercial nuclear power plants built in the rest of the world,” states Dr. Henry. “Because of the Cold War, we had only a sketchy idea of the RBMK designs and how they were operated prior to the event. In those days, if we traveled abroad, we were always asked if you had contact with anyone from the Iron Curtain countries.

This accident resulted from a desire to use the energy of a coasting-down turbine to power water injection into the reactor core if an accident condition were to result in a loss of electrical power to the plant. To investigate the real plant response, USSR scientists and engineers decided to test this concept on one of their plants. The intent was to initiate a loss of power transient for a reactor that was about to be shut down for refueling. As the reactor was in the process of being shut down and prepared for the test, the Kiev power dispatcher requested more power from the site and the reactor power had to be increased for a period of time."

Continues Dr. Henry, "A return to power from the plant state was complicated and the manner in which it was accomplished led to the violation of procedures that were in-place for safe operation of the plant. Another complicating feature leading up to the accident was that the test to be conducted was on the plant electrical equipment, so an electrical engineer was in charge, in the control room, for the test to be conducted that night. He had no understanding of the reactor core configuration caused by the return to power, the influence of a 'positive void coefficient', etc.

Another difference between the RBMK design and those used in the United States and elsewhere is the protection of a high pressure leak-tight containment building that surrounds the nuclear core and the reactor cooling system. A high pressure leak-tight containment is an important aspect of the plant design and licensing evaluations in the western world, but this was not part of the design for the Chernobyl plants. Therefore, the runaway power escalation rapidly over-pressurized the reactor coolant system such that it burst open, discharging the nuclear fuel and radioactive fission products into the surrounding environment. The gaseous and aerosolized fission products were ejected high into the air above the plant and these circulated to the north over the next two and a half days until an engineer walked in from the parking lot and into the Forsmark plant on a rainy Monday morning in Sweden. On entering the plant, he set off the plant radiation alarms because his shoes picked up radioactive iodine and cesium fission products that had been captured by the rain as they passed overhead. This was the first that the western world knew of the nuclear accident in the USSR and at the Chernobyl site specifically. When the satellite cameras were reviewed early on Saturday morning of April 26th, 1986, the flash from the bursting of the reactor coolant system and the discharged of fuel bundles out of the plant building could be seen from space.

Radioactive fission products from the Chernobyl were detected in the air in the Iron Curtain countries and Italy, France, Germany, Sweden and others. In fact, the radiation level in Harrisburg, Pennsylvania due to the Chernobyl accident was three times higher than peak observed from the TMI-2 accident in 1979. Fear of the unknown is a powerful emotion and it caused milk and food to be confiscated in some counties and also resulted in the shutdown of the one nuclear plant that was operating in Italy at the time as well as the stoppage of construction of one that was being built."

Following the TMI-2 and Chernobyl accidents, Fauske and Associates, LLC assisted a number of U.S. utilities, including Commonwealth Edison in the evaluations of individual commercial nuclear plants with respect to their defensive-in-depth capabilities for a large range of accident scenarios. The results of these studies were entitled Individual Plant Examinations (IPEs) and they were submitted to the Nuclear Regulatory Commission (NRC) for their review. Most of these were eventually expanded into full Probabilistic Safety Assessments (PSAs). In addition, in the early 90’s, FAI was selected by Electric Power Research Institute (EPRI) to formulate the Technical Basis Report that characterized the status of the important phenomena that could occur during a core damage event in a sufficient manner to formulate Severe Accident Management Guidelines (SAMGs) for both Boiling Water Reactor (BWR) and Pressurized Water Reactor (PWR) designs and all types of high pressure leak-tight containments. As part of this, a new version of the Modular Accident Analysis Program (MAAP) code (MAAP4 and later, MAAP5) was chartered to support the evaluations of SAMGs for different designs for a large spectrum of accident conditions. All of these have added to increase the defense-in-depth for protection against accident conditions that could result in overheating of reactor cores.